The Rebels might be getting more than they bargained for when they drop off a high-level prisoner in issue #16 of Marvel’s Star Wars comic. 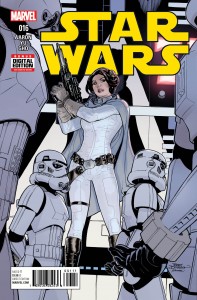 The blockbuster Vader Down crossover may be over, but the Rebel Alliance is not out of the woods just yet! Today, Marvel is pleased to present your first look at STAR WARS #16 – the first chapter of “Rebel Jail”! Chart topping writer Jason Aaron and incoming artist Leinil Yu bring you the exciting next adventure in the hit series! Following the events of Vader Down, the Rebels travel to a prison base with their high-value detainee Doctor Aphra in tow. Unfortunately, they aren’t the only ones with eyes on the prison! With the base under siege by mysterious foes, can Luke, Han, Leia, Chewie and the Droids prevent a mass breakout? Be there as the exciting new story arc begins this February in STAR WARS #16!

If you’re a Star Wars fan, then you really need to be reading at least this book, and I’d recommend you read everything Star Wars that Marvel is making right now- it’s all awesome. This one though, is the flagship, and has hit a homer with almost every issue.

Here in issue 16, things get a little different for the series. With the close of the Vader Down arc, the Rebels head to a prison complex in a story by writer Jason Aaron, and penciler Leinil Yu. Rebel Jail features all the big guns too, with all the major series characters that you already know and love taking center stage.

Jason's been knee deep in videogames since he was but a lad. Cutting his teeth on the pixely glory that was the Atari 2600, he's been hack'n'slashing and shoot'em'uping ever since. Mainly an FPS and action guy, Jason enjoys the occasional well crafted title from every genre.
@jason_tas
Previous Yes, there is a story behind Street Fighter V
Next LEGO Dimensions Ghostbusters set arrives, scares up new trailer