Character one-sheets for the new Ghostbusters reboot haunt the web

Fresh from the Sony Pictures production that will become the basis for an all-new universe, we’ve got our first look at the main characters of Ghostbusters. 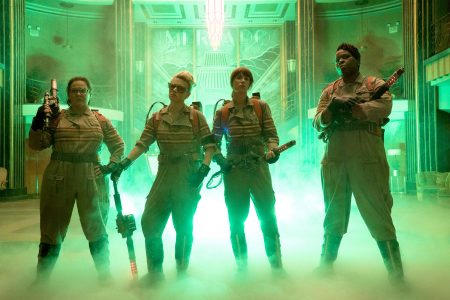 Above you see the ‘hero’ image of the four new Ghostbusters in all their glory, but while that pic has been circulating for a few days now, individual pictures of the new fab-four have just been released by Sony. Each one-sheet shows an individual GB, complete with a tool of the trade, as reimagined by new director Paul Feig.

Everything looks right in line with what you’d expect, with a more modern bent of course. While all the marks seem to be hit here though, I’m still a little upset as a big fan. It’ bothers me that this film doesn’t just continue the series, and instead reboots the continuity.

I still don’t see why that track needed to be taken, and why the first two (they were both good, you know it) movies needed to be tossed out for the casting of a new lineup of ‘Busters. Why were they incompatible? I still haven’t read a solid reason for that.

But maybe that’s just me. What say you?

Jason's been knee deep in videogames since he was but a lad. Cutting his teeth on the pixely glory that was the Atari 2600, he's been hack'n'slashing and shoot'em'uping ever since. Mainly an FPS and action guy, Jason enjoys the occasional well crafted title from every genre.
@jason_tas
Previous Grand Theft Auto: Liberty City Stories goes mobile for iOS and Android
Next Brand new DC Direct solicits include plush, Bombshells, and The Squad