What would have happened in Transformers lore if Optimus Prime was never killed (the first time)? How about if Cobra actually won and nominated the globe in G.I. Joe? This new line of one-shots seeks to answer those questions, a bunch more. 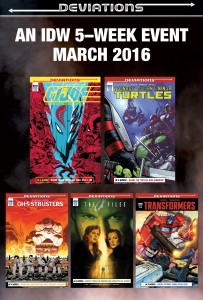 True of everything (even the real world), that ‘aching one thing’ and everything changes thought will have some interesting effects on some of IDW’s biggest books starting in 2016. With this new series of single-issue comics, you’ll get some very different looks at some of the best-loved franchises of all time.

On a weekly timetable, the whole things starts off with Ghostbusters before rolling on into G.I. Joe, Transformers, and X-Files (what if Fox Mulder had been abducted and never returned), before wrapping up in the pages of Teenage Mutant Ninja Turtles, which (like the Ghostbusters Deviations issue) has no description as of yet…

As for the creative teams, here’s how that’s set to shake out:

Things kick off and continue throughout March of 2016.

Jason's been knee deep in videogames since he was but a lad. Cutting his teeth on the pixely glory that was the Atari 2600, he's been hack'n'slashing and shoot'em'uping ever since. Mainly an FPS and action guy, Jason enjoys the occasional well crafted title from every genre.
@jason_tas
Previous Get a fresh look at the X-Files sequel mini-series in this new featurette
Next Volcanion Announced for Pokemon