I am a massive AC fan, and to be honest I was dreading Syndicate joining the franchise. The characters didn’t initially appeal to me, and after playing Unity and not enjoying it as much as previous games, I was worried the brand was heading for the rubbish heap. Boy, was I wrong!!!!

The gameplay itself, from start to finish, is very similar to all other games in the collection.. The only difference being the new weapons available for main protagonists Jacob and Evie Frye, twin assassins who learnt the Creed from their father.

Jacob added some fantastic comical moments, similar to the quick wit of Ezio and Edward, where as Evie reminded me of Connor, very much driven by passion for the greater good. Their characters were very well written, and definitely connected with me as a player.

Graphics were phenomenal, as always with these games, and the cityscapes of London, and all its intricate architecture was beautiful. The history of London included in the story was quite different to previous games, and gave me more characters to play alongside, whether they were on our side or not.

And I especially enjoyed the mystery of it all, wondering if someone was a double crosser or not, or if they were who they said they truly were. The added mysteries in the game were also carried on through the game’s side missions, working with the likes of Dickens, Darwin, and even Her Majesty Queen Victoria herself.

Collectables are another AC staple carried on through to this game. Many have little to no relevance to the story, yet a few were quite interesting, if for nothing else than to read the information found with them. 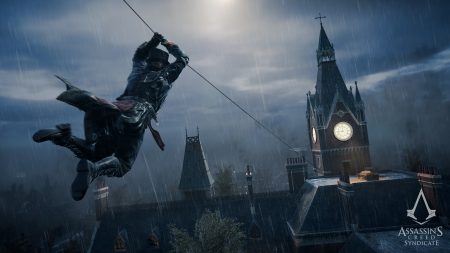 As far as technical issues, a big problem in last year’s Unity, the only problem I found with Syndicate really was a glitch on sequence 5, involving a chase with a train. I have heard that a lot of other gamers also had this issue and I hope Ubisoft can patch the problem if not already done.

The sequences themselves differed in size in Syndicate by the way, some were considerably shorter than others, but in all they each covered very intense moments in the Frye’s lives. Another new thing in the game mechanics is the chance to switch between who you play as.

I personally found this handy as Evie was much better at the stealthy missions, whereas Jacob’s strength was handy for boss fights. Levelling up is still a similar system, you earn points to buy new skills and enhance them, then there’s also the customisation of the characters still. 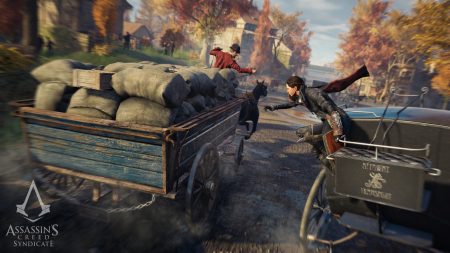 Of course this review has to discuss the First Civilisation, and Juno’s appearances toward the end of the game. Juno who is still out to enter our word, is still very much trying to break her way through apparently, there wasn’t as much information on her plans in this game as there has been previously, meaning we are left more intrigued as to what will happen in future installments.

We do join Rebecca and Shaun though, along with a few other character in the present day, who are instructing you on what you need to find to help them in their time to stop the Templars. All of this of course ties in to the ‘new’ cycle, which began after the ‘Desmond cycle’ ended with AC3.

After completing sequence 6, you will unlock WW1 mode. In which you can become Lydia Frye, once you enter the time glitch in the Thames. This game mode is a nice little add on, that has a few missions totalling around 15 hours of gameplay.

Unfortunately the ending of the story line for me was a bit too abrupt, with no substance or future, and I am one of those gamers that likes the story to play out. I get drawn all in, and I need closure at the end. AC usually has that but this ending was not like that at all. I don’t know whether Ubisoft did it that way to tie in with WW1, but I hope that is one thing they will look into on the next game. 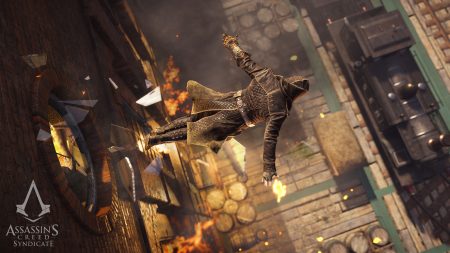 I really did enjoy Syndicate a lot more than I was expecting, the story drew me in, and I enjoyed following the character’s journey. The visuals were exquisite as always with Assassins Creed, and London really was alive in all its Victorian glory.

The ending did let it down slightly, but the side missions related to great historical figures more than made up for that. In comparison to other entries in the franchise, this one wouldn’t reach the top, but it most definitely makes an impact and brings some new things to the whole game.

The interchange protagonist is one thing I would love to see carried on to other games in the series if possible, but I do miss the present day gameplay as a break up of the past missions. Overall, Assassins Creed Syndicate blew away my expectations, and has definitely become one of my top games for this year.

One of BG's UK contributors and a PlayStation super-fan, Kiri is self-described as "super competitive" and can be most often found shouting at her other half "kicking my butt on Injustice".
Previous Nintendo Direct talks a little of everything, and a surprise Smash Bros challenger
Next Mezco’s One:12 Collective Lawmaster bike is ready for pre-order 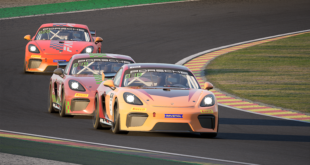 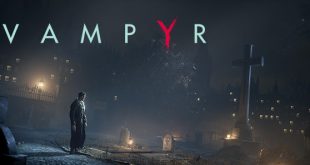 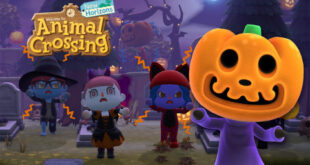