It might not be Turok Tuesday (remember that?!), but the original Turok: Dinosaur Hunter and its sequel are on the way to the PC, and in enhanced form. 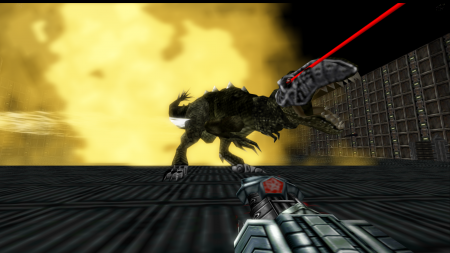 From developer Night Dive Studios, the first two entries (read: the best two) in the Turok series of dino-fighting FPS’ have been torn from pre-history (the late 90s) and are almost ready to bite down on a new generation of gamers.

The new versions of both titles will come complete with enhanced graphics and what Night Dive is somewhat mysteriously saying will be “other improvements”. No further info as to what that might mean, though they could just spiff up the looks, release Turok as is, and have a great little game on their hands.

We’ll have more on these as it’s released, as it stands now, you can expect to see Turok: Dinosaur Hunter and Turok 2: Seeds of Evil land on Steam, GOG.com, GamersGate, Greenman Gaming, The Humble Store, and the Night Dive Studios Store some time soon.

Jason's been knee deep in videogames since he was but a lad. Cutting his teeth on the pixely glory that was the Atari 2600, he's been hack'n'slashing and shoot'em'uping ever since. Mainly an FPS and action guy, Jason enjoys the occasional well crafted title from every genre.
@jason_tas
Previous PAX Prime: Vermintide skitters into the show in playable form
Next Toy Soldiers: War Chest – Hall of Fame Edition (Xbox One) Review