The Art of UNCHARTED 4: A Thief’s End is officially on the way to bookshelves everywhere in 2016 from Dark Horse Comics. 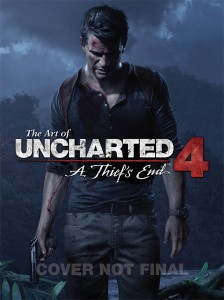 I’m not going to say too much about Dark Horse’s art books, because they kind of don’t need too much prose. I will say that they’re some of the best on the market and the publisher’s already existing Naughty Dog tomes (The Art of Naughty Dog, The Art of The Last of Us, and The Art of Uncharted Trilogy) are ample example of that.

In a way, I suppose this newly announced book is kind of a sequel to the Uncharted Trilogy book in that it solely follows and explores the next game in the series, that being Uncharted 4. That game might also be the last game in the series, depending on who you ask, so The Art of Uncharted 4 might be a grand way to cap off one of the most celebrated series’ on PlayStation.

Given the usual treatment that Dark Horse prides itself on, the book will come in an oversized format, with a hardcover presentation and tons of interior art. The book will be on the shelves next Spring, while the game will arrive on the PS4 a bit before that, though there’s still no official date.

Jason's been knee deep in videogames since he was but a lad. Cutting his teeth on the pixely glory that was the Atari 2600, he's been hack'n'slashing and shoot'em'uping ever since. Mainly an FPS and action guy, Jason enjoys the occasional well crafted title from every genre.
@jason_tas
Previous Pneuma: Breath of Life (PS4) Review
Next Bloodshot Reborn #4 (Comics) Review