Marvel’s animated universe gets its Minimates due

Starring in a brand new line of Minimate 2 packs exclusive to Walgreens stores, DST’s new series of Marvel figures is based on the entertainment giant’s lineup of animated series. 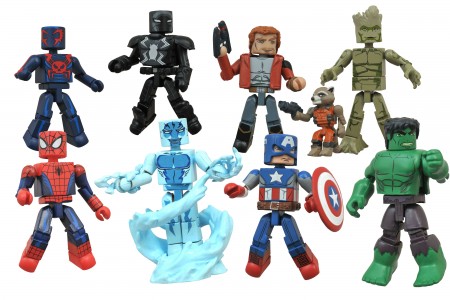 If you haven’t noticed, Marvel has done a pretty spectacular job of quietly building a universe of animated TV series’. Interconnected in the same way as the company’s movies and TV shows, these animated programs are loaded up with the biggest characters that Marvel has to offer, and tons and tons of guest-stars.

And stepping right in to provide some plastic accompaniment to those shows is DST with its Minimate line of 2″ figures. Packaged 2 to a pack, the first series of Marvel Animated Minimates are set to include some of the most popular characters from the cartoons.

Pretty neat lineup all around and awesome that Electro glows in the dark there. And if you’re new to Minimates, yes all that stuff comes along with the two figures as bonus extra accessories. That’s just one of the reasons that Minimates have been around for as long as they have, and been as popular as they still are today.

This series is exclusive to Walgreens stores, and you’ll start seeing them at retail starting on September 4th. This is just the first wave too, and Diamond says that there’s more planned throughout the year.

Jason's been knee deep in videogames since he was but a lad. Cutting his teeth on the pixely glory that was the Atari 2600, he's been hack'n'slashing and shoot'em'uping ever since. Mainly an FPS and action guy, Jason enjoys the occasional well crafted title from every genre.
@jason_tas
Previous Icon Heroes’ new SDCC exclusive mousepad is highly logical
Next The eShop gets artistic this week with Art Academy