Want the added benefit of a second screen display as you game, but don’t want to take your eyes off the on-screen action? PDP’s Project Delphi is here to help. 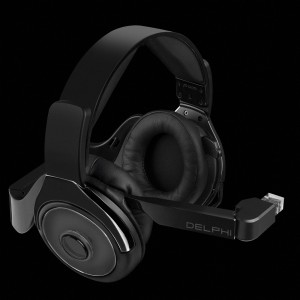 “You can think of Delphi as Google Glass for gamers, without the forward facing camera,” said Tom Roberts, CTO of Performance Designed Products. “It’s simple and flexible, yet powerful, in its hardware approach. Delphi displays whatever content users choose, from the companion apps to YouTube gameplay tutorial videos – all with an HDMI input. It allows a dual-monitor set up, except that monitor is a wearable.”

Now that’s some pretty interesting stuff right there. Google Glass, but without the camera and with the ability to display smartphone apps like SmartGlass on what looks (to your eye) like a 24″ screen. The built-in optical engine simulates the large-screen display on a small-screen LCOS display that sits just 4″ from your right eye.

The images shown run at WVGA resolution (so 800×480) and give you a widescreen presentation with adjustable brightness of up to ~450 lumens. All that sounds pretty cool, but the unit is only in its prototype stage at the moment. A prototype that’ll be on display at E3 this week, so I’m sure this is something that you’l be hearing plenty more about in the days to come.

From the sound of the company’s CEO, Chris Richards, there just might be plenty more where that comes from too, as the industry goes a little HMD crazy.

“PDP is committed to investing in Augmented and Virtual Reality technologies,” said PDP CEO Chris Richards. “We are excited and optimistic about the future, not only as it relates to the Video Game space, but other industries as well.”

No word yet on availability or pricing, but again, keep in mind that this is only a prototype. It still might be some time before we get specifics on any of the above.

Jason's been knee deep in videogames since he was but a lad. Cutting his teeth on the pixely glory that was the Atari 2600, he's been hack'n'slashing and shoot'em'uping ever since. Mainly an FPS and action guy, Jason enjoys the occasional well crafted title from every genre.
@jason_tas
Previous DC Collectibles quests for 275k likes before Comic Con
Next E3 2015: Mass Effect goes to Andromeda in new game