Sequel to Valiant’s Divinity set for 2016

Divinity will be a presence in the Valiant U for the rest of this year, but will also star in a full-on sequel mini-series in 2016. 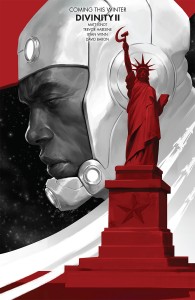 “DIVINITY is different than any character I’ve ever written before. I thought it would be fun to purposely create a character that is so overpowered – so amazing – that he’s practically a god. The fascinating thing is then creating a scenario and a challenge for him. What can stand against a character like that?” said series writer Matt Kindt. “I’ve been blown away by the response that I’ve gotten online and in-person at conventions – I’m always working to create a story that I think would be fun for me to read, so seeing the enthusiasm that DIVINITY has created has been amazing.

“Now the fun is launching this insane cosmic being into the existing Valiant Universe and seeing what trouble he can cause (or solve) in other books,” he added. “And best of all? We’ve been green lit to do a full-on sequel! I’m super-excited to be joining up with Trevor, Ryan, David, and Jelena for the next chapter — we have an even bigger story in store for next year. DIVINITY is a character that started out as a small idea and blossomed into a character that I have years of ideas for. I’ll be returning for as long as they’ll let me.”

Sounds good to me. Divinity just wrapped up with issue #4 this week, and the ride was a wild one that is more than deserving of a second run. I have to say, I love Valiant’s track with books like Divinity too, in that they create a fantastic character and run him for a limited series, then see about a sequel or guest-starring roles in other books.

For a character like Divinity too, it makes perfect sense, as he’s just a wee bit overpowered as Kindt says above, and probably wouldn’t be the best fit for an ongoing in the line of Bloodshot or Imperium. And speaking of, that’s the next place that he’ll show up, as he goes toe to toe with another uber-powerful dude in Toyo Harada and his Imperium group this August.

That sighting will have to be enough to tide you over though, as Abram won’t show his face till Divinity II arrives some time next year. Oh, and if you’re wondering what all the hubbub is about, do yourself a favor and grab an issue of the first mini-series (if you can find one). That, or pick up the trade paperback, which will be out on July 15th.

Jason's been knee deep in videogames since he was but a lad. Cutting his teeth on the pixely glory that was the Atari 2600, he's been hack'n'slashing and shoot'em'uping ever since. Mainly an FPS and action guy, Jason enjoys the occasional well crafted title from every genre.
@jason_tas
Previous Batman goes to war in new Arkham Knight trailer
Next Medco unleashes the first look at its 12″ Sub Zero figure from MKX