It’s kind of a big deal that Secret Wars and Convergence, two very similar event books, are happening at basically the same time right now from DC and Marvel. That’s not to say that there’s not other great stuff on the racks this week though. 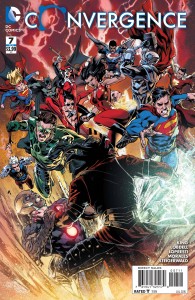 Honestly, the two biggest books are probably Secret Wars #3 and Convergence #7 though.

After having just revealed most of the crazy backstory for Secret Wars 2015 in the last issue, things are only going to get even more insane this week with the residents of Battleworld in general starting to see that there’s something wrong with the status quo, and Doom in particular. And yes, if you haven’t been reading, then you probably have no idea what that means, but that’s all the more reason for you to go and grab the first two issues along with #3 tomorrow.

Over in DC, things are heating up in Convergence and heading towards the climax of the book, and the fallout to come. Heroes (and some villains) from across the Multiverse all team up to take down their captor. And for those who’ve been wanting to see the New 52 characters in this story, you’re about to get your wish granted.

Outside of those (and a ton of crossover books) there’s also some great stuff this week from IDW and Valiant, as well as Dark Horse, who’ve got he second issue of Archie vs Predator on the racks. Scroll on down to see the full list of what my picks are for this week, and don’t forget to click here for the full catalog of what’s available, as seen on Previews magazine’s main page.

Jason's been knee deep in videogames since he was but a lad. Cutting his teeth on the pixely glory that was the Atari 2600, he's been hack'n'slashing and shoot'em'uping ever since. Mainly an FPS and action guy, Jason enjoys the occasional well crafted title from every genre.
@jason_tas
Previous Exodus comes to X-O Manowar this Summer
Next Brutal goes to EGL