Remember those little comic books that were included with the vintage (and some of the new) Masters of the Universe figures? Well, they’re back in a massive collected tome from Dark Horse Comics. 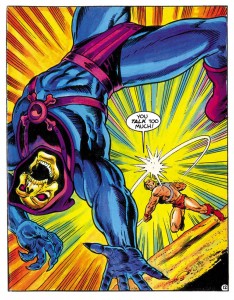 As a massive MOTU fan myself, this is a book that I’ve been waiting for for a long time. A long, long time. Like, since the 80s. Well, maybe not that long, since I had all the mini-comics back then, but it didn’t take too long till they were all destroyed or lost or whatever, so the point is that I don’t have any of these darn things now, and I want them back. Cue Dark Horse.

You can expect to find this one on store shelves on October 21st of this year, and you can pre-order a copy for yourself right this very second via Amazon.com, Barnes & Noble, IndieBound, or your local comic shop.

Jason's been knee deep in videogames since he was but a lad. Cutting his teeth on the pixely glory that was the Atari 2600, he's been hack'n'slashing and shoot'em'uping ever since. Mainly an FPS and action guy, Jason enjoys the occasional well crafted title from every genre.
@jason_tas
Previous Hey look, console footage of The Witcher 3 (now with more scaling on Xbox One)
Next ARK: Survival Evolved brings you back to the Jurassic