Yes, the month is pretty much over, but Nintendo still has a few little nuggets of gaming goodness ready to hit the eShop in the rainiest month of the year. 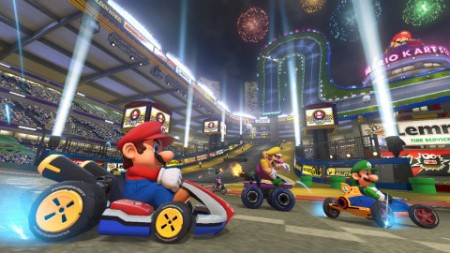 Do you like Mario? How ’bout Super Smash Bros? Okay then, chances are you’ll have something to enjoy the rest of this month on the Wii U.

Nintendo has outlined the major offerings posting to its digital download service, the eShop, for the last little bit of this April. Basically, there’s Mario Kart 8 and Super Smash Bros DLC, those free-to-play-for-a-few-minutes Amiibo games, and the demo for Puzzle & Dragons Super Mario Bros. Edition.

Actually, not a bad lineup of new stuff at all since the month is pretty much over with only a week to go.

Jason's been knee deep in videogames since he was but a lad. Cutting his teeth on the pixely glory that was the Atari 2600, he's been hack'n'slashing and shoot'em'uping ever since. Mainly an FPS and action guy, Jason enjoys the occasional well crafted title from every genre.
@jason_tas
Previous The latest Resident Evil remake has passed 1 million sold
Next Hammerfall Studios crafts a very unique take on Warhammer 40K with Regicide