Ever wanted to see Harley Quinn’s face staring at you menacingly from your bookshelf or dresser? Previews has you covered. 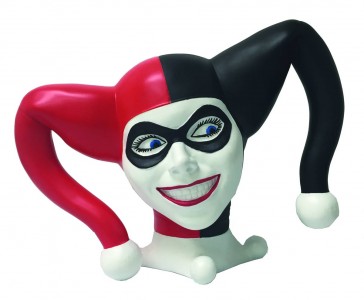 Previews magazine’s latest exclusive item, this brand new bust/bank is one that Batman fans in general probably won’t want to miss out on. Harley is just about as popular as she’s ever been, a runaway success since being added to the official DC Universe years ago, and well on her way to being featured in the Suicide Squad feature film, portrayed by Margot Robbie.

Fans know that the character got her start on one of the greatest superhero cartoon shows of all time though, that being Batman: The Animated Series. Decked out in her traditional (as opposed to her current) garb from that show, this bust/bank is looking appropriately, well, creepy. That’s a good thing though, as Joker’s gal is almost as butty as he is, which is really saying something.

The bust/bank is the latest in a series that can serve both functions, holding onto your coins or just looking awesome in your collection, and measures an impressive 11 ½” tall by 14” wide. Harl will be heading to local comic book shops this coming August, and you better believe you can pre-order one for yourself right now.

Jason's been knee deep in videogames since he was but a lad. Cutting his teeth on the pixely glory that was the Atari 2600, he's been hack'n'slashing and shoot'em'uping ever since. Mainly an FPS and action guy, Jason enjoys the occasional well crafted title from every genre.
@jason_tas
Previous The Enterprise arrives on store shelves… along with some turtles and a goblin
Next Bloodborne Sold 155K Digital Copies To Date