The 3DS will play home to a  whole new batch of Sega 3D Classics this Summer, including Gunstar Heroes and Streets of Rage II. 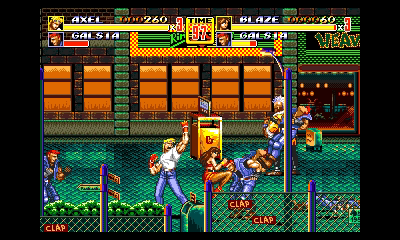 Well, if you’re a Sega fan then I’ve got to believe that you’re a happy camper right now. The Sega 3D Classics series on the Nintendo 3DS is after all, pretty neat in that the 3D is well-executed almost universally in the series. Even with Fantasy Zone II (which comes out in two days) and May 14th’s Super Thunder Blade on the way though, there are more than a few games that could still use the third-dimensional shift, and that brings us to today and the announcement that there are indeed more on the way. In fact, this Summer is going to offer a trio of new ones.

July will bring the first of the new batch (wasn’t that a movie title?) and have Streets of Rage II on the docket, while Gunstar Heroes will arrive in August and Sonic the Hedgehog 2 will blast-process its way onto the handheld in September. Those are some pretty nice choices and two out of the three are day one purchases for me. The series seems to be doing pretty well too, since we’re getting still more games added, so I have to imagine that there’s a chance for even more titles to be announced in the future.

What say you readers? What games would you like to see get all 3D-ified?

Jason's been knee deep in videogames since he was but a lad. Cutting his teeth on the pixely glory that was the Atari 2600, he's been hack'n'slashing and shoot'em'uping ever since. Mainly an FPS and action guy, Jason enjoys the occasional well crafted title from every genre.
@jason_tas
Previous Celebrate Mortal Tuesday with a special deal on MKX figures from Mezco
Next Can’t pull off a Fatality in MKX? There’s a micro-transaction for that