Hold on, things are about to get odd… Oddworld that is, as the remade adventure of Abe arrives in the form of Oddworld: New n’ Tasty for the PC. 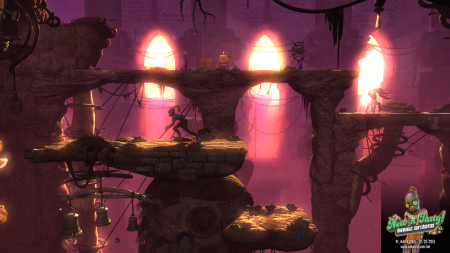 I’ve never played any game in the Oddworld series, but I’ve always wanted to. It was one of those things that, while it attracted my attention, it was never enough to warrant a purchase. Looking back, I think I’m glad that I didn’t buy the game when I was younger, because I don’t think I would have caught on to the deep story, and the difficulty alone would have ground away my interest before too long. However, with the release of Oddworld: New n’ Tasty, I felt it was time to give the series the shot that it’s deserved for so many years.

Right off the bat, you can see an immediate difference between Abe’s Oddysee and New n’ Tasty, not only does the game look nicer, it also sounds nicer. This is because the game was done from the ground up, none of the original assets were used, but were completely redone in a modern graphical engine. The graphics weren’t the only thing that received a lovely new coat, the sound was also redone, orchestrated in the exact same way with modern recording equipment, and it really is quite impressive.

Along with the complete revamp of the graphics and score, the dialogue has also been re-recorded, and while nothing was taken out, some cutscenes and new lines of dialogue have been added to make the game seem a bit more alive. 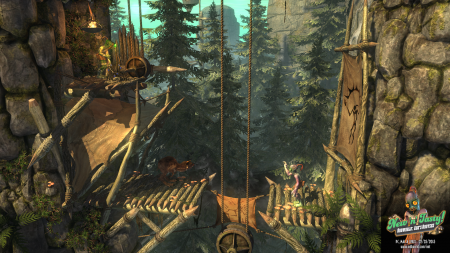 Oddworld is more than just a fun platformer with a weird art design. In fact it’s actually a very well woven and incredibly deep story on racism, overproduction, and over-consumption. The game begins with the main character, Abe, in a self monologue. He mentions that he (and what he thinks is the rest of his race) is a slave, but he doesn’t really mind it all that much, as it is the only thing he has ever known. He works in a food factory, Rupture Farms (which he has never been outside of), which make delicious snacks from various types of alien animals. As I mentioned before, what appears to be most of his race (named the Mudokon), has been enslaved by the evil, money hungry Glukkon.

During his janitorial shift at Rupture Farms, Abe catches a glimpse of the Glukkon CEO’s in a bit trouble through a crack in the door. It seems that the RF stocks are dropping, so they need a new n’ tasty (heh.) treat to add to their snack lineups of Paramite Pies, ElumChubs, and Scrab cakes. These delicious new snacks are Mudokon Pops. Panicked, Abe realizes he must escape Rupture Farms, and free as many of his race as he can.

Going back to what I said earlier about “weird art design”; I love the coloring of New n’ Tasty, as well as the graphic and animation style. The game is littered with dark humor, which in my opinion is the best kind. The design of Abe himself is strange, you can easily tell by looking at his physical appearance that he is a slave, not to mention that a couple of parts of his mouth are sewed shut (which is horrifically depressing, if you ask me); also, he has that ‘so ugly he’s cute’ thing going on for him, which really adds another layer of feeling bad to the whole mix.

At first the music was thoroughly enjoyable but, I hate to say it, after a while started to grate on my ears so I turned it down. Then I wanted to listen to my own music, so I shut it off all together. 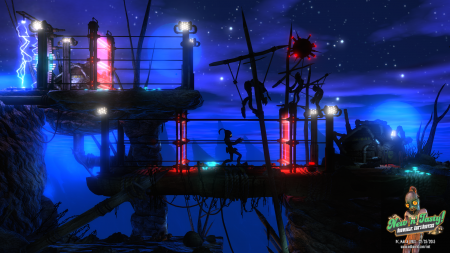 New N’ Tasty is a puzzle platformer (read: deceptively simple). The first level is straightforward, but still gives you a good general idea of what you’ll be coming across. The Second level is a little more puzzle… istic(?) and has one part that, I swear, it took me at least a half hour to get through (time for mental breakdown, included). Over time more mechanics are introduced to you, and while I don’t want to spoil anything, it’s easy to see why the Glukkons locked away the Mudokon (Spoiler: they have some crazy mind powers).

As I mentioned a moment ago, the difficulty spikes up in some areas to frustrating levels, so much so that I seriously wanted to give up and go play a different game sometimes, and occasionally I did. However, it’s not as difficult as the game it remastered. NnT has more checkpoints and better controls, so it is overall simply more forgiving than its original (thank goodness for that -ed).

Odd world: New n’ Tasty is a strangely beautiful tale of realizing self worth, taking control of your own life, and the world’s true constant struggle with over consumption and greed; but delivered in such an odd (heh) way that it feels almost lighthearted and uplifting.

The unnecessary difficulty spikes seem unbearable at first, but I promise, if you fight through, you will love the outcome.