Valiant Comics’ newest monthly hero, Ninjak already has his own series set for debut next month, but there’s way too much to fill in for the deadly assassin and it just can’t all fit in one narrative. Enter The Lost Files. 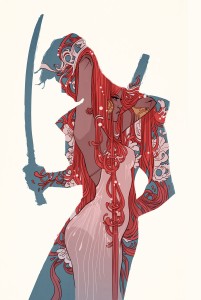 More than just a typical back-up feature, each chapter of NINJAK: THE LOST FILES will be integral to the lead narrative of NINJAK‘s ongoing series. Not only will NINJAK: THE LOST FILES reveal the secrets of Ninjak’s training and origin for the first time in any medium, but also add new depth and dimension to the epic adventures of MI-6’s leading super-spy as he begins the hunt for the Shadow Seven – the clandestine heads of the terrorist Weaponeer organization – in the modern day.

Then: meet inexperienced MI-6 recruit Colin King on his first mission in the field as he learns the basics of spycraft and counterintelligence, and develops a volatile relationship with his first handler. Now: Colin King is Ninjak, the world’s foremost intelligence operative, weapons expert, and master assassin. And he’s tracking the Shadow Seven – a secret cabal of shinobi masters with mysterious ties to his training and tragic past.

I’ve always liked back-up stories and this one looks particularly interesting. Each 40 page issue of Ninjak, which will include the back-up ‘The Lost Files’ series, will cost the standard $3.99 USD cover price too, which is a nice little bonus as a jumbo book usually equals a jumbo price tag.

Penning both tales included in each issue will be writer Matt Kindt, though the penciler will be different. The standard story, which runs along with the current Valiant timeline, will be drawn by Clay Mann. As for The Lost Files, the flashback origin of Ninjak will have Butch Guice lending his considerable talents to it.

Representing both past and present in one issue of an ongoing series is certainly an interesting decision, though Valiant looks to be pulling it off quite nicely here. We’ll have more for you about Ninjak as the debut of his new series draws a little closer (March 11th), but in the meantime, enjoy the onslaught of these awesome and moody as all get out preview pages.

Jason's been knee deep in videogames since he was but a lad. Cutting his teeth on the pixely glory that was the Atari 2600, he's been hack'n'slashing and shoot'em'uping ever since. Mainly an FPS and action guy, Jason enjoys the occasional well crafted title from every genre.
@jason_tas
Previous The Escapist (Xbox One) Review
Next Hand of Fate (PC) Review