As far as fictional characters go, Walter White seems like he’d be pretty interesting to have a talk with. And thanks to Previews, you’ll have that chance. 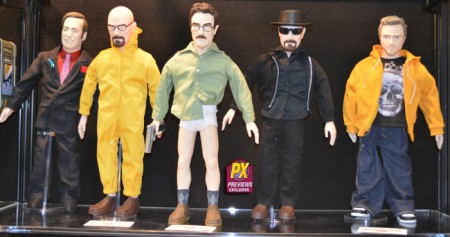 Of course, the conversation that you can have with old Wally here might be somewhat limited since he can’t actually converse. He can however, say a whole bunch of phrases from the ultra-popular show that ended its run last year. Walter is exclusive to Previews as well, which’ll make him and his underwear a little tougher to locate than the rest of the line.

There’ve been a bunch of awesome BB collectibles over the last few years, when the show really started to take off, but I think these are probably the coolest by a good margin. Not only are the sculpts great and fun-looking, but the figures themselves are of a really nice scale at 17″ tall, and -of course- they can talk, which is a first for the property.

The Wonderland Toy Co. LLC produced figures are bendable, so you can pose ’em however you like, and they say 15 phrases a piece. The entire lineup will cost you $39.99 USD for each (including Walt) and they can be had via your local comics shop starting this coming June.

Here’s a rundown of what each figure can say (warning, some of this is ever-so-slightly NSFW) : 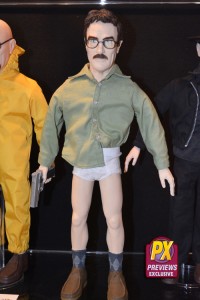 Jason's been knee deep in videogames since he was but a lad. Cutting his teeth on the pixely glory that was the Atari 2600, he's been hack'n'slashing and shoot'em'uping ever since. Mainly an FPS and action guy, Jason enjoys the occasional well crafted title from every genre.
@jason_tas
Previous Let’s have a chat about gameplay length in Triple-A titles
Next Seven deadly new reasons to play Rebellion’s Zombie Army Trilogy