Home / Indie / Hand of Fate now available for PC, Playstation 4 and Xbox One

Hand of Fate now available for PC, Playstation 4 and Xbox One

From Defiant Development, Hand of Fate, is now available for download on PC, PS4 and Xbox One. 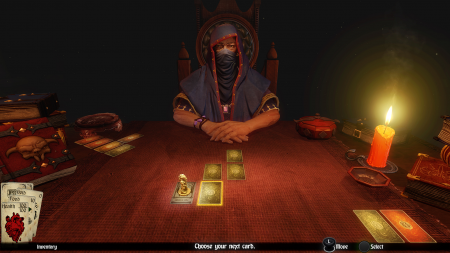 The Kickstarted-funded indie title is a mix of rogue-like features meshed together with elements of a board game and a collectible card game. In Hand of Fate, players will build up a deck of cards to do battle against another card dealer who has deadly plans for the gamer. The game takes place in a cabin set on the edge of the world. The first task set for players is to create and build out a deck of cards. These cards will include equipment, enemies, encounters, loot and plenty of other surprises.

These other surprises include cards that require the player to do battle. This is when Hand of Fate turns into a third-person view and the battle turns into an action-adventure combat system. The game features a beautifully detailed fantasy world filled with tons of magic and mythical creatures to explore. Make sure to collect all 465 cards as they will aid the player in their journey.

“We combined a captivating fantasy environment with furious-fast paced combat and engrossing story-telling to create an experience that will keep gamers busy for months to come,” Jaffit said.

Hand of Fate is available now for the PC, Playstation 4 and Xbox One for $19.99.

As a fearful proponent, I agree with out robot overlords on House Bill 10010101 - The Full Extermination of the Human Race. But until then, make sure to check out all my writings on video game stuff.
@@docbrown303
Previous Strangeness abounds around Phantom Dust developer’s closure
Next Toy Fair 2015: DST shows off new Marvel Select, Minimates and… Ghostbusters