Home / Comics / The Imperium arrives in the Valiant U this week

The Imperium arrives in the Valiant U this week 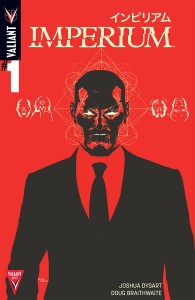 Toyo Harada is the most dangerous human being on the planet. Imbued with incredible powers of the mind, he has spent his life guiding humanity from the shadows. But today he is a wanted man. His powers are public knowledge, his allies have turned to enemies, and he is hunted by every government on the planet.

Instead of surrendering, Harada has one last unthinkable gambit to play: to achieve more, faster, and with less, he will build a coalition of the powerful, the unscrupulous and the insane. No longer content to demand a better future, he will recruit a violent legion from the darkest corners of the Earth to fight for it. The battle for utopia begins now.

Now this should be a wild ride.

Valiant Comics’ bad guys aren’t really of the run-of-the-mill variety, and a book led by the biggest baddie of them all could be a really god time for readers. Toyo Harada is more-or-less, for those who haven’t followed Harbinger or Unity, Valiant’s main villain. He’s the Lex Luthor, the Dr.Doom, the Cobra Commander of the Valiant Universe and will be leading a squad of the most dangerous men and women (and robots) that the publisher has to offer in its newest monthly book: Imperium.

As with most great villains too, Harada’s goals are admirable. He wants a perfect world, a utopia. The problem is that, also as with most great villains, his chosen means to get to those ends are… well, not too good. Imperium is set to be an ongoing series, so I imagine you can expect plenty of crossovers with Valiant’s heroes (and other villains more than likely) as the run moves forward. If you haven’t read either of the books I mentioned above, and don’t know the character of Harada, you might want to give Imperium a shot. He’s not a one-dimensional comic book bad guy, and the vibe that Valiant is shooting for here is certainly sounding like something very cool indeed. Imperium is also one of my picks of the week (if I can get a little plug in), so if you read the Comic Shop Picks series that we run here at BG, you already know I’ll be reading this one on Wednesday.

Jason's been knee deep in videogames since he was but a lad. Cutting his teeth on the pixely glory that was the Atari 2600, he's been hack'n'slashing and shoot'em'uping ever since. Mainly an FPS and action guy, Jason enjoys the occasional well crafted title from every genre.
@jason_tas
Previous Would you want to play, or even help make, a third Condemned title?
Next Mortal Kombat X Kollector’s Edition announced