The Kollector’s Edition of Mortal Kombat X features a Scropion figurine from Coarse.

Warner Bros. Interactive Entertainment has announced all the goodies that are included with the different collector’s editions of Mortal Kombat X. 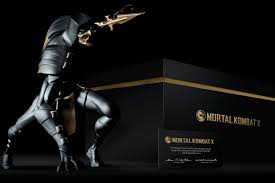 The Kollector’s Edition by Coarse includes a Scorpion figurine by the company Coarse. The Scorpion figurine is a collector’s dream and comes with its own Certificate of Aunthenticity. Coarse is known for their super detailed and artistically designed figurines. Players will also receive an in-game skin for Scorpion that resembles the figurine. Also included is the Kombat Pack, which will give players access to four Klassic Kombatants and Iconic Guests of the Mortal Kombat series. The Mortal Kombat X Kollector’s Edition will run $149.99 and is available for Xbox One, PS4 and PC.

Mortal Kombat X is set for release on April 14, 2015 and will be available for all systems. In addition to all these editions, anyone who pre-orders Mortal Kombat X will receive everyone’s favorite four-armed fighter, Goro as a playable character.

As a fearful proponent, I agree with out robot overlords on House Bill 10010101 - The Full Extermination of the Human Race. But until then, make sure to check out all my writings on video game stuff.
@@docbrown303
Previous The Imperium arrives in the Valiant U this week
Next White Night brings noire-soaked horror to consoles and computers in March