Warhammer Quest heads from mobiles to the PC. Does it hold up? 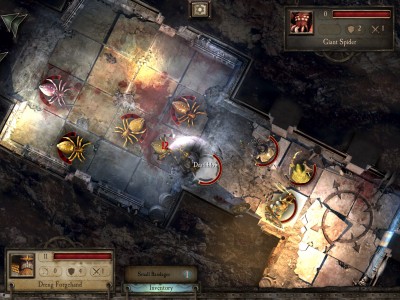 Warhammer Quest is an RPG being developed by Rodeo Games and Twistplay, and published by Chilled Mouse which is set to be released on January 7th of this year, 2015. Right now, at the time of writing, that is only 2 days away and the game is 20% off until release, which is a good reason to pick it up early. The system requirements are nothing insane either, and honestly, even your grandmother’s rig could run this. Another good thing about Warhammer Quest is that if you have slow or mediocre internet (like me), it is a very small download, which puts you into the thick of it even sooner.

I’ve never played any Warhammer titles (EVER?! -ed), neither the tabletop game based on building armies (and I’m sure much more that I’m not aware of) nor the other video games titles. But being a fan of strategy, this game is right up my alley. The premise is that your party, a.k.a. your group of adventurers, and you travel around the game world gathering and selling loot, upgrading and buying items, and finding quests from cities and city outskirts. The main map that you travel around and select locations to go to is set up within the tabletop style, as if you’re hovering over it, viewing it.

As you finish quests, you unlock/remove more map fog, which allows you to progress further into the game and further around the map to other towns, and to discover more quests of course. Upon entering dungeons, you choose the warriors you want to take with you. Each has special abilities and traits, but depending on the difficulty you’re playing, they can perma-die, so be careful. I started with an archer-type character, a mage, and a warrior, and then proceeded to other variations as I went along. 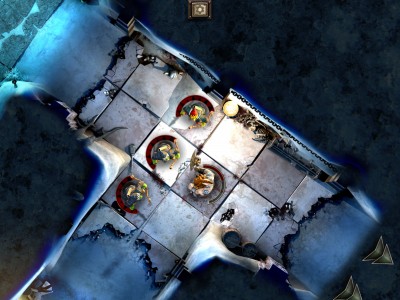 Dungeons are completed through turn based movement and combat. All your warriors have ‘X’ number of movement ‘points’ and attack ‘points.’ (I use points loosely because I’m not sure what the game actually calls them.) Upon entering each subsection of a dungeon, you are given a list of the NPC creatures that you are about to go up against. Subsections are explored by moving a warrior to their entrance. I’ve seen online that the dungeons are procedurally generated, but I cannot find any evidence to verify that hypothesis.

Seeing as this game isn’t officially released yet, it doesn’t quite have all the kinks worked out. One annoying bug that has happened to me quite a few times, is that I’ll select a target to attack, but the warrior will attack a different square. (As misfortune would have it, each time it’s been one of my own squares with a warrior on it, and there’s even been a few deaths.) The ‘miss’ chance also seems to be very high. On one turn, I used four attacks on one unit and they all missed. This makes the game feel like it’s exclusively based on luck – so be prepared to pray to RNGesus, boys and girls!

As you finish quests you progress through the story; which is non-linear. There are constantly times where you must choose X or Y, ‘good’ or ‘evil’, right or wrong – which to me, is a a very enjoyable mechanic. You are also offered multiple quests after each one; some of which are more difficult but yield better rewards.

The downfall of this game for me is that it lacks an ‘addiction’ aspect. Most games draw you in for multiple hours before real life beckons you back, but still you’re compelled to return and finish the game. Whereas this one, for me, is one that I open up, play for about half an hour or so, then grow tired of it and don’t return until a couple days later. However, the game is also available for mobile platforms, which I feel may be more appropriate – something to play on the commute to work and back.

The music and sound effects in the game are well suited but nothing above and beyond; nothing spectacular. But for a dungeon crawler RPG, it’s not really an element I’d expect to be overdone. The story on the other hand, really captures the essence of that classic role-playing game. As mentioned earlier you are almost always given choices, and the story plays out as you complete dungeons (quests). The story/stories are the greatest part of the game for me. 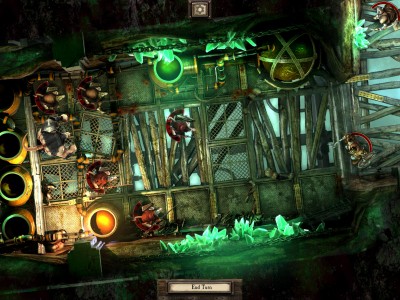 When exploring the main menu, I discovered an ‘Additional Content’ selection. It contains things like more Dungeons, Characters, and Legendary items. I haven’t progressed far enough into the game to know if it becomes Pay2Win, but I assume that it does not, since it’s not a free to play game. This can be viewed as a negative, but the game itself does have a small purchase price, and I’m sure this is actually additional content.

In conclusion, I am going to give this game a 6/10. The well done storyline and writing, the classic dungeon crawler vibe, and how they really make it feel like a tabletop game are all positives for me.

However, the feeling that it’s very-much based on luck (All hail RNGesus, destroyer of mankind!), the lack of addiction, and my warriors occasionally attacking each other (bug) are definitive negatives, which really need to be addressed. I don’t think this game is for everybody, but it does provide entertainment, so I leave that final decision up to you. Good or evil?

I am an avid gamer residing in Ontario, Canada. I play games from almost all genres, but my favourites are Strategy games and RPG's. Hobbys I have other than gaming are playing bass, reading, and building/upgrading computers.
Previous Nintendo offering an early shot at the new 3DS for some Club members
Next Spoiler Alert- Batman: Arkham Knight Collector’s Edition may give away key plot point