The Uncanny Avengers are reborn in a post-Axis world

Axis might be over, but there are some massive roster shifts for the Avengers as they join the X-Men in unravelling the mystery of counter-Earth. 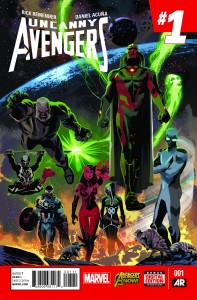 The tragedy at the end of Avengers & X-Men: AXIS has left the Uncanny Avengers vulnerable. The Avengers Unity Squad as we know it has been decimated – and someone is taking advantage of it! Biding his time, one of the Avengers oldest foes has returned. Why now? And what does it have to do with the reborn Avengers Unity Squad?

What is Counter-Earth? What secrets does it hold? An unlikely alliance of Avengers & X-Men will form, seeking answers. Only what they find will in all likelihood destroy the lives of two of its own members. To brave Counter-Earth, the new Uncanny Avengers – Scarlet Witch, Quicksilver, Vision, Captain America, Rogue, Brother Voodoo and a now-heroic Sabretooth must stand together, or perish alone.

As tensions run high and the secrets of Counter-Earth are laid bare, will this new Unity Squad’s first mission be their last? The answers lie in the explosive debut of UNCANNY AVENGERS #1, coming to comic shops and digital devices this January!

I can’t get used to Sabertooth as a good guy… it’s just too weird. In a lot of ways, that describes the Marvel U after the reality shifting events of Axis, where the Red Skull gained the powers of Onslaught and really ran wild on the heroes and villains alike of Marvel’s landscape.

Now with a reborn team of X-Men and Avengers, the new squad that’s featured in Uncanny Avengers is a little askew and a lot new. With Brother Voodoo and Sabertooth in there, it couldn’t be anything else though I suppose.

As to what Counter-Earth is, well, that’s the question that the book seeks to provide the answers to, as readers get to see a mostly new team in action, up against a whole new threat that may or may not lead right into the craziness that Marvel has in store for everybody here in 2015 with the Secret Wars event.

If you’re an Avengers fan though, it goes without saying that you shouldn’t miss out on this one. Uncanny Avengers #1 hits the stands on the 28th of this month, from the team of Rick Remender (natch) and Daniel Acuna.

Jason's been knee deep in videogames since he was but a lad. Cutting his teeth on the pixely glory that was the Atari 2600, he's been hack'n'slashing and shoot'em'uping ever since. Mainly an FPS and action guy, Jason enjoys the occasional well crafted title from every genre.
@jason_tas
Previous Bionic Commando storms the Nintendo Download
Next Summer 2015 heats up for DST