In the same line as their already released Street Fighter Tribute and Darkstalkers Tribute art books, publisher Udon has an all-around Capcom tribute book in the works. Here’s the catch though, they need your art to make it happen. 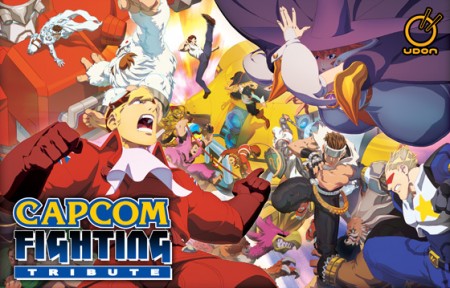 Well, maybe not your art in particular, as you do have to have some skill with the pencil and/or new-fangled computerized drawing tools, but you get the idea. These books are loaded with submitted artwork from fans of every type and, while they’re usually bound by a theme, this new edition is all Capcom- no restrictions on who or what you draw. If it’s in a Capcom fighting game, it’s fair game.

That’s a pretty massive catalog of fighters right there, stuff that should provide the best of you out there with more than enough material to pump out form impressive looking pieces. Udon, of course, has a great history with Capcom properties and has a terrific lineup of art tomes that’s only growing. And if it seems like the pub is in love with Capcom, particularly during the 90s, then you’d be right, and they’re looking for the Capcom Fighting Tribute to be their biggest anthology ever.

“The 1990s were a Golden Age that saw the release of many peerless fighting games, and some of the best Capcom artwork also comes from that special time,” said Matt Moylan, UDON’s Managing Editor. “Capcom Fighting Tribute will be an exhaustive homage to the great games and amazing artwork of that era, and with so many featured properties, we expect this to be our biggest and most diverse Tribute project yet!”

All you need do to take part is get your completed masterpiece in to Udon between December 17th and January31st, 2015. Team shots, solo pics, and just about anything else are just fine, so let your imagination go wild here. Udon also says that submissions are welcome from pros and fans alike, so even if you’re not a published artist already, you’ve got a shot at inclusion here.

As for when you’ll be able to pick up a copy of this bad boy, the book itself is on target for a hardcover debut at SDCC 2015, this coming July.

Jason's been knee deep in videogames since he was but a lad. Cutting his teeth on the pixely glory that was the Atari 2600, he's been hack'n'slashing and shoot'em'uping ever since. Mainly an FPS and action guy, Jason enjoys the occasional well crafted title from every genre.
@jason_tas
Previous Dark Horse makes their 2015 New Comic Book Day Silver offering official
Next Xian Mei returning to Dead Island for MOBA Dead Island: Epidemic