The end begins for the Fantastic Four in issue #642

Is this really the start of the final story for Marvel’s First Family? Could be, and it starts off with a bang. 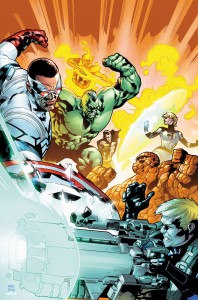 This January, the countdown begins…and the end of Marvel’s first family is upon us in FANTASTICFOUR #642 – the first chapter in The End is FOURever! Blockbuster writer James Robinson and artist Leonard Kirk’s epic endgame begins as the Invaders crash headlong into the Fantastic Four and the hunt for Reed Richards and the missing Future Foundation kids takes a dangerous turn! Meanwhile, the mastermind behind the systematic dismantling of the Fantastic Four reveals his ultimate plan. But how does Franklin Richards and his unchecked powers factor in? And why are Jim Hammond, Namor, All-New Captain America and Doc Green hunting the remaining members of the Fantastic Four? Nothing lasts forever. Don’t miss the beginning of the end this January in FANTASTIC FOUR #642!

I still can’t believe that Marvel is ending the run of one of their oldest books, and most classic superhero groups. I’m not sure if it’s really sunk in with fans yet either as this is a really, really big event here. As massive as Axis has been, and as big as Secret Wars will be in Summer 2015, this is kind of even bigger.

I mean, this is the FF here, they’ve been around forever, and soon they might be just a faint memory in the Marvel U. Well, maybe. The End if FOURever starts off in Fantastic Four #642, which is scheduled to hit stands on January 14th, 2015 from the team of James Robinson and Leonard Kirk.

Jason's been knee deep in videogames since he was but a lad. Cutting his teeth on the pixely glory that was the Atari 2600, he's been hack'n'slashing and shoot'em'uping ever since. Mainly an FPS and action guy, Jason enjoys the occasional well crafted title from every genre.
@jason_tas
Previous Meet Ciri, the second playable character in The Witcher 3: Wild Hunt
Next Neon Genesis Evangelion: The Shinji Ikari Raising Project Volume 15 (Comic) Review