Brothers: A Tale of Two Sons is an incredibly beautiful puzzle adventure of two sons trying to find a cure for their dying father. Using

simultaneous two-character controls, Brothers raises the challenge of the puzzles as well as the engagement of the player. Starbreeze Studios crafted a beautiful world that weaves the mechanics of the game perfectly within the environment, transforming this game into the immersive adventure it is. Brothers harmoniously blends the gameplay and story within the interactive environment to create one of the most engaging games.

In Brothers, the player controls two brothers who go on a search for a cure for their sick father. The beginning starts in their village and

introduces the player to the beautiful Scandinavian-like world these brothers inhabit. The design is flawless and beautiful. The overall aesthetics of the game perfectly immerse the player in their environment. The developers decided to forgo translatable dialogue, using a fictional language, which forces the player to focus more on the nuanced actions of characters and scenery. This helps enhance the immersion of the player within this world. The ambiance of Brothers creates a setting that invites the player to explore the incredible world around them.

The story is simple, but heart-felt. Its simplicity helps drive home the emotional intensity of the characters. Starbreeze Studios fosters a depth of feeling for the brothers without ever needing them to speak and that is no easy feat. Both boys have distinct personalities that shine forth in how they interact with objects and people around them. The differences in their behavior quickly became a highlight in playing; I would often interact with objects simply to see how they would respond to the brothers. The gameplay is woven expertly with environment. Actions by the brothers are seamlessly used to further the story. The brothers’ interactions with the world around them

is central to the game’s mechanics.

Brothers challenges the player with interesting gameplay and puzzles. The game can be played with a keyboard but is much more comfortable with a controller because each brother is controlled by one analog stick and one trigger. The analog stick controls the movement of the specific brother while the corresponding trigger causes the brother to interact with the world. The controls produce unique challenges as the brothers will have to do separate tasks, splitting the attention of the player. Gameplay involves solving puzzles in order to progress to the next area. The puzzles increase in difficulty and intuitively build upon the abilities learned from previous obstacles. The challenge of controls added to the actual puzzles push the limits of tradition puzzle adventures to a new boundary.

Brothers: A Tale of Two Sons masters the puzzle adventure genre with engaging gameplay, story, and environment. Each facet of this game boosts the enjoyment and immersion. Starbreeze crafted a beautiful world and story complemented by interactive, challenging gameplay. The characters have depth and personality despite lacking dialogue, and elicit emotion throughout the game. If I had any complaint, it is that I wish it was longer because I want to spend more time in this world. Brothers: A Tale of Two Sons is a journey that everyone should experience. 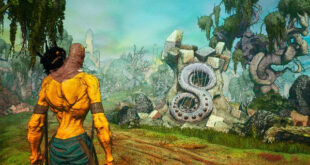 Actioner Clash: Artifacts of Chaos about to get new Next Fest demo

The horrifying vision of Ebb Software’s strange, alien world will be officially arriving a week …