The iconic 1980s TV show returns in a new comic from IDW and Lionforge Comics that brings the characters into the modern age. 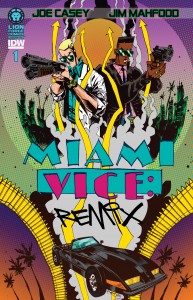 “Working with Jim is always a trip and taking on ‘80s TV icons like Crockett and Tubbs was too good to pass up,” said Casey, Miami Vice Remix co-creator and writer. “Whether you’re familiar with ‘Miami Vice’ or not, this book will burn a hole in your brain.”

“Comics should be for everyone, regardless of how fans prefer to access and consume content,” said David Steward II, Lion Forge CEO. “With IDW’s innovative spirit, Lion Forge will reach more readers and bring new life to classic properties like ‘Miami Vice.’”

I’m not sure if you could have grown up in the 80s and not have good memories of Miami Vice. The overly stylish show was a staple in most people’s TV diets and starred Miami-Dade Police Department detectives Sonny Crockett and Ricardo Tubbs. The pair were basically 80s personified in their brightly colored shirts and rolled-sleeves blazers.

What they’ll be this time around is still something of a mystery though as the comic isn’t set in the original TV show’s universe, but in modern day Miami- hence the ‘remix’ subtitle. Just how that’ll work out I don’t know. The recent film that tried the same thing didn’t dare all that well, but the comic already has a few things going for it that the movie didn’t, namely that they got the outfits down and the vibe looks right.

And then of course, there’s also writer Joe Casey, who you might know from Uncanny X-Men and Adventures of Superman, and artist Jim Mahfood, who looks to be going wild with a cartoony look that’s very fitting for the theme. So far, so good, even with the time-shift.

Check out Miami Vice Remix when the first issue hits the racks this coming February.

Jason's been knee deep in videogames since he was but a lad. Cutting his teeth on the pixely glory that was the Atari 2600, he's been hack'n'slashing and shoot'em'uping ever since. Mainly an FPS and action guy, Jason enjoys the occasional well crafted title from every genre.
@jason_tas
Previous Be the OG, Godzilla on the way to PS4/PS3
Next Elite: Dangerous Launch Trailer Released