Unity is looking to grow their ranks, but The United might have something to say about that. 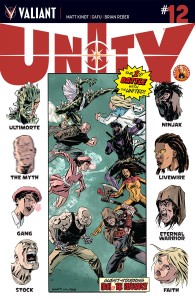 A new day has dawned for the elite assemblage of heroes called UNITY, and, in the wake of the Armor Hunters’ invasion, the time has come to grow their ranks. Who will be the next fearless hero to join the roster of the world’s most elite superteam? And just what is the international strike force called THE UNITED – and why have they marked UNITY’s own X-O Manowar, Ninjak, Livewire, and Eternal Warrior for elimination? Red-hot creators Matt Kindt and CAFU detonate the planet’s first superteam vs. superteam war right here with a bold new beginning for UNITY!

Unity has been something of a force in the Valiant U since their debut and their recent battles with the alien Armor Hunters have cast the team as the defacto powerhouse group on Valiant’s Earth. Much like all of the classic teams in comicdom though, it’s time to shake things up a bit with some new members.

There are a few solid candidates floating around for membership in the group, though who will be ending up on the final roster is still a surprise (I’m betting on Bloodshot). As for their opponents, The United, they’re a complete mystery as they haven’t popped up anywhere else before. It’s also a mystery why they hate Unity so much, though I guess you don’t get to be that powerful without making more than a few enemies.

Find out what’s shaking in Unity land when issue #12 hits the stands and kicks off a brand new arc this week.

Jason's been knee deep in videogames since he was but a lad. Cutting his teeth on the pixely glory that was the Atari 2600, he's been hack'n'slashing and shoot'em'uping ever since. Mainly an FPS and action guy, Jason enjoys the occasional well crafted title from every genre.
@jason_tas
Previous Check out Far Cry 4 looking all kinds of awesome in the ‘101’ trailer
Next Persona 4 Arena: Ultimax (PS3) Review