The Assassins and the Templars take their long standing war to the next generation. 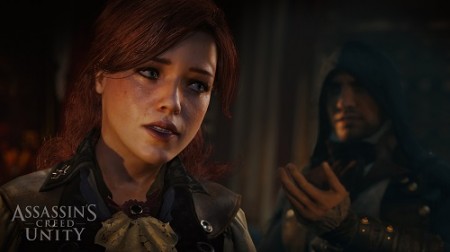 Since Ubisoft started to annualise the Assassin’s Creed franchise, there have been a series of highs and lows.  Last year’s Black Flag was arguably the most enjoyable entry in the series yet, although it was also by far the least ‘traditional’ Assassin’s Creed game in the series.  The first game to be developed specifically for the next-generation consoles, Unity is ambitious in that, rather than simply iterating, it tries to rebuild the series from the ground up.  While there have been some improvements and great additions, some of the old problems still remain.

Unity takes place in Revolution era Paris, and sees you playing the game through the eyes and blade of Arno Dorian, the son of an Assassin who was murdered when Arno was just a boy.  What follows is pretty much a standard revenge mission, with betrayals and twists along the way.  As a protagonist, though, you’re not really given much reason to care about Arno, and the story is so played out and uninspired that you don’t really get into it as much as you’d like.

18th-century Paris is a beautiful and diverse place to be.  Climbing up to the top of landmarks such as Notre Dame and syncronising the viewpoints give you a impressive sense of just how big the city it.  The grand, ornate palaces of the wealthy nobility of France clash with the ordinary people below, bartering and trying to make a living, with women on street corners selling newspapers and blacksmiths hammering away at their forges.  The slums are a pretty dark place too, with the sick and destitute lying around in filth or stumbling along.  The vast crowds of Paris are a wonder to behold too, as hundreds of citizens swarm around, protesting about palaces or simply enjoying a show.  As you make your way through the crowds, there will be little things that happen organically around you too, such as pickpockets who you can try and grab, or criminals threatening to kill people if they don’t pay up.  Completing these little events gives you money or can unlock gear for you to use as well, so it pays to do these things. 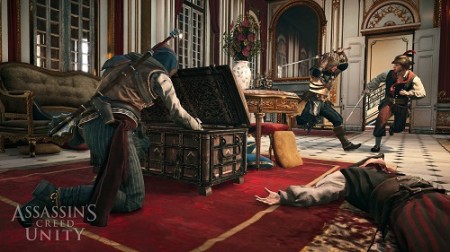 There are plenty of things to climb up in the city, as you can imagine, and traversal has been made simpler and quicker with the introduction of new ‘parkour’ traversal, which you can use to slide down rooves and slopes quickly, meaning there’s no need to simply leap off a building and hope you don’t get too badly damaged, as with previous games.  The classic hay carts are still around, though, for when you’ve synchronised the viewpoints.  However, there are still issues with climbing sometimes, especially around balconies and windows.  Your attempts to drop from the rail of a balcony to the floor will often result in you simply jumping to the rail on the other side, or in the case of open windows, climbing up past the window when you want to go inside.  Pressing the left trigger is supposed to put you in the window, but it doesn’t always work properly.

Stealth has become a much more important aspect of the game this time around.  It’s possible to use the crowds to your advantage when there’s a group of guards, so you can kill one from inside the crowd and step back inside before the other guards see you.  If you do get spotted, the new fencing inspired combat system allows you to take down a couple of enemies and works really well, with parrying at the correct time allowing you to stun your opponent momentarily, enabling you to get some big blows in with your weapon.  Things get a bit cluttered then there are three or more opponents, but you can usually take the cheap route and throw a smoke bomb down, taking a couple of the guards down while they can’t see you.  One new feature is the ‘ghost’ view, as seen in the more recent Splinter Cell games, where a ‘ghost’ of Arno will appear in the last place a guard saw him.  They will then often wander towards that spot, giving you a chance to hide and take them out when you get near.

The tailing missions, which have often been a sore point with a few people, are kept to a minimum, which is good, as even the couple that are in the game are frustrating.  One of the biggest changes to the single player story is the introduction of the sandbox-like ‘Assassination’ missions.  You have a set target to kill, who will be in a building teeming with guards.  Around the building are various objectives, such as causing a diversion for the guards, or bribing someone to open a window for you so you can avoid certain areas.  There are also various ways to enter the buildings, such as sneaking in through the roof, finding an open window, going in from underneath or even just going in all guns blazing.  This is probably the most fun I had with the game, trying to figure out how I was going to tackle the mission at hand. 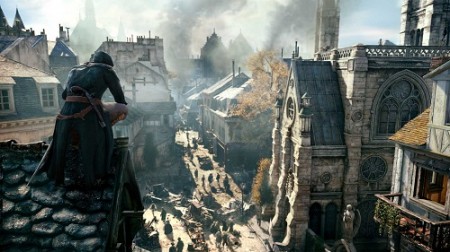 Taking down enemies in different ways will earn you ‘Creed Points’, which you can use to upgrade your gear.  ‘Helix’ points, which you can earn at certain points or buy using real money, can also be used to upgarde.  New gear is available to you to buy as you complete certain objectives, and there are different types and levels of gear that you can use to customise to your preferred style, so you can choose between, say, having a more effective stealth rating at the expense of health, and the like.  Completing memories will also earn you Assassin Points, which you use to unlock various skills and abilites, being able to customise Arno to suit your play style.  There’s plenty to play around with, so you can find something that’s right for you.

The ‘real world’ aspects of the Assassin’s Creed franchise, that have formed a major part of the games up until this point, have been largely removed from Unity.  You are an initiate, looking to get some information before Abstergo get it, but the only actual in-game breaks from Arno’s story inolve going around Paris during different time periods, but I won’t spoil exactly what you do in those sections.  Meanwhile, the number of side missions and collectibles have increased dramatically.  There are various missions that give you more stories about Paris, have you solving puzzles by finding symbols and taking on missions to improve the cafe above the Assassins base of operations. 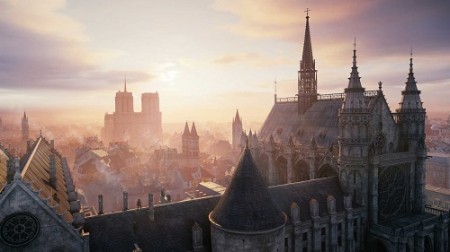 The competitive multiplayer from previous installments of the franchise has been removed in favour of a co-op multiplayer mode, which comprises of a variety of missions for 2 to 4 players.  With the different skill sets, co-operation and communication is absolutely essential to progress.  The co-op is fun when playing with friends and people you can rely on, but jumping in with random players proves to be frustrating when they go solo or just run in all guns blazing, causing you to fail your mission.  But the missions are well designed and interesting, and this is a great addition to the game.

At the time of writing, there are a couple of issues with the game.  The massive crowds of people, while impressive to look at, do tend to get in your way when you’re just trying to get somewhere, making wall and rooftop traversal a quicker way to get around.  The frame rate drops quite a bit in the crowds as well.  On a couple of occasions early in the game, I had some major frame rate drops when there was seemingly very little going on.  The character models, when killed, also sometimes clipped through surfaces and contorted in very strange ways.  I also found myself getting stuck in the scenery on a couple of occasions and having to fast travel out.  They aren’t game breaking problems, but they are glaring and will hopefully be patched out in future.

FINAL THOUGHTS
Assassin’s Creed Unity is one of the better games in the franchise.  The co-op mode and the sandbox assassination missions really add a breath of fresh air, and the city of Paris is filled with beauty and character.  The technical issues are something that need to be addressed, the story doesn’t feel particularly original and Arno isn’t an especially interesting character, but the game is a lot of fun to play, and there’s plenty of things to do, even when you’re done with the story missions.  As the first ‘next generation’ Assassin’s Creed game, this is definitely a good start.

Mike is Brutal Gamer's Indie Editor. He has been playing video games since the early 90s and is fond of racing games, puzzlers and MMOs. Typing /played while in WoW makes him cry, but not enough to stop him playing some more.
@Ognawk
Previous Fan petition gets SOCOM OST’s released on CD
Next Guardians of the Galaxy comes home for the holidays