Big deals to expect for Black Friday on toys and games

Black Friday (the Friday after Thanksgiving in the US) is always loaded up with deals, and here in this article our friends at DealNews take a look at the best of what’s to be expected in terms of games and toys from this coming kickoff to the Holiday shopping season. If you’re in the market for some LEGO’s or Frozen toys, this is your time to strike. 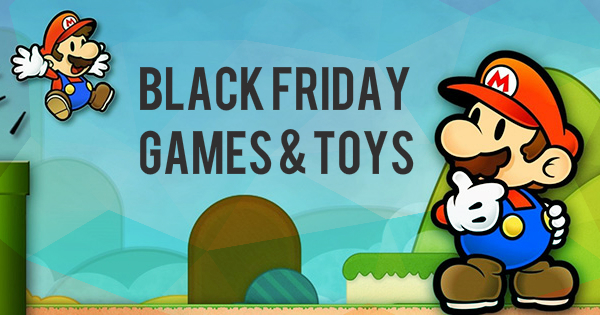 While TVs and other electronics get all the attention as Black Friday doorbusters, toys and video games have emerged to be a weighty presence during the shopping holiday. If you’re a gamer or adult who has kids’ toys on the brain, it’s a good time to score an Editors’ Choice deal. So what prices and sales can you expect to see?

Black Friday is an Amazing Week for Toy Deals

Our research shows that for the first time ever, Black Friday in 2013 was the strongest week of the entire holiday season for Editors’ Choice toy deals, with 48% receiving the honor. This includes Cyber Monday, which (according to our math nerds), is the single best day to look for toys. That’s when we’ll see the highest volume of toy deals of any day of the season, and about half of them will be marked Editors’ Choice. (Thanksgiving Day will be a close second.) Look for sales that take up to 75% off a wide swath of toys.

If you somehow manage to miss or sleep through every one of the awesome toy deals during Black Friday, all hope is not lost. You will again be rewarded with a deal renaissance during the two weeks that follow Cyber Week (from December 7 through December 20). At that time, toy sale volume will again increase and those deals will also have a respectable percentage of Editors’ Choice deals, too. At this time you’ll see discounts of up to 85% off. Either way, it might be best to skip Cyber Week, aside from Cyber Monday; this timespan will be a dead zone for toy deals.

If You Only Shop at One Store, Make it Amazon

We’ve observed Amazon’s Black Friday behavior for several years, and we can only describe their attitude towards toy deals as “mania.” The store is obsessed, offering at least twice as many toy deals as anyone else, not only on Black Friday, but throughout the season.Plus, starting on Cyber Monday, Amazon will begin to offer massive sales, where it discounts dozens of toys, all at once. These are always a great way to grab lots of gifts, on the cheap, and come off looking like a Super Santa. They might not be that one special thing that your tot wants, but they’ll be a nice supplement and a less expensive way to grow that toy pile.

Walmart is also good for huge toy sales, but Amazon is usually quick to price-match each deal Walmart dares to offer. So, again, if you only watch one site for toy deals during Black Friday and the holidays, Amazon is your best bet.

Let’s Get Specific About Toys

It’s important to realize that these predictions apply to toys in general; there’s no guarantee that the very specific toy you want will be on sale during Black Friday, so toy shopping at this time is usually best for people with flexible needs. However, there are a few types of deals that should see some predictable trends this year.

LEGOs at Up to 71% Off
Kids love LEGOs … but so do adults. According to our research, the best time to pick up a set will be Black Friday week (the Monday before Black Friday, through Cyber Monday), because the average discount will be 52% off, with some sets seeing a drop of up to 71% off! Further, that same span of time will see twice as many deals as the rest of the season. Better still, half of those deals will be marked Editors’ Choice, too.

No Deals on Fabulous 15
Here’s the first disappointing news of the season: Don’t expect too many sales on the Toys “R” Us Fabulous 15 this year. Toys “R” Us’ list of the year’s hottest toys has been pretty accurate in predicting what kids want for the holidays, and perhaps as such, we won’t be seeing many deals on these in-demand items. However, if a deal were to appear, it likely would be on Thanksgiving or the day before.

‘Frozen’ Items at Up to 85% Off
The good news? Frozen-branded items (including toys, but also things like blankets and lampshades) are going to be discounted up to 75% off during Black Friday week, but then up to 85% off during the second week in December! The bad news? The biggest discounts are probably going to be on those lampshades and other less-than-fun things to play with. Still, a Frozen gift is aFrozen gift! Be glad to find any Frozen stuff, as it’s still super popular and will still be selling out in a blink.

For Video Games, Timing Is, Again, Everything

The best gaming deals of the season will arrive on Thanksgiving Day. That’s when we expect to see the highest ratio of Editors’ Choice console and game deals, more than any other day of the season. (Black Friday and Cyber Monday are close seconds though.) Alternatively, the two weeks before the holidays will have up to twice as many deals total as those offered during Black Friday week, although they probably won’t be as good.

Console Yourself With These Console Deals

Xbox One From $350
In June, Microsoft began offering two versions of the Xbox One console: One with Kinect included, and one without. Though ostensibly a cost savings, our pricing data indicates that during Black Friday you should be able to pick up the Kinect-less version for $350, while the version with Kinect will only be $20 more, at $370. (That’s 26% off the retail price of $499.) Unless you’re dead set against controlling your games with your gyrations, our advice would be to buy the Kinect-included version; paying for a stand-alone Kinect later will cost $150 at MSRP. Since the stand-alone Kinect module was just released in October, we’re not anticipating any big discounts on it during this holiday season either.Where Xbox One prices will really fluctuate is on bundle deals. Stores will try and tempt you to buy the new console together with multiple games and an additional controller, for lots of money. Before you jump in, do some math. Estimate that each game included in the bundle costs $60, then subtract that cost from the total bundle price. If the price you’re left with is not less than $370 (with Kinect included) or $350 (without Kinect), then it’s not a good deal!

PlayStation 4 for $340
Unlike the Xbox One, which will see lots of bundle deals (some that are even worth your time), the majority of deals on the PlayStation 4 will be for the console alone. Look for this next-gen system to drop 15% off list price and go for $340 during Black Friday.

Wii U for $250
Prices for Nintendo‘s latest console have bottomed out over the last year. We frequently see the Wii U sell for $250, but we’re not anticipating anything lower during Black Friday. Where you might see a better bargain is on bundles, which will be fairly common for this console this holiday season. Please follow the advice in the Xbox One section, above, to learn how to evaluate if a bundle deal is worth your money.

Though you may find a great deal on one this Black Friday, remember that they are one year closer to end-of-life than they were last year. If you’re on the fence about the next-gen prices, it might be best to wait another year, rather than buy an old one now; why buy the old version “just to get something” when it’s nearing the end, and the thing you should really get is probably less than a year away from being at the price point you can afford?

The Games People Play at Up to 60% Off

If you need to stock up on games for your next-generation console, then Black Friday is also the time to keep your eyes peeled! We’re expecting discounts of 25% to about 35% off hot, current-generation games during Black Friday Week. “Hot” as in “games you’re actually looking forward to playing,” like Call of Duty: Advanced Warfare, Assassin’s Creed Unity, FIFA 15, Hyrule Warriors, and more. Expect those and other newly-released games to get as low as $40.

If you have not yet upgraded, then your slow-to-change nature has resulted in even better news for you! We’re expecting hot games for last-gen consoles to drop by about 30% to 60%, falling as low was $25 during Black Friday.

If you’re a PC gamer, then you’ll want to start looking for PC gaming deals even earlier than Black Friday. For the past four years, Steam has held its big Autumn Sale starting the day before Thanksgiving, cutting up to 90% off a selection of PC game titles. Unfortunately, despite featuring many “lowest ever prices,” its sale might be hit-or-miss according to your gaming preferences, as the titles will be a mixed bag of awesome, good, and just OK. What’s more, if you miss the Autumn Sale, there will be a Winter Sale in December, which may offer better discounts or at least a “better” (different) selection of games.

Excited for Black Friday game and toy sales? Consider subscribing to the DealNews Select Newsletter to get a daily recap of all our deals; you never know when a Black Friday deal will be released! You can also download the DealNews app or check out all our features for more buying advice.

Jason's been knee deep in videogames since he was but a lad. Cutting his teeth on the pixely glory that was the Atari 2600, he's been hack'n'slashing and shoot'em'uping ever since. Mainly an FPS and action guy, Jason enjoys the occasional well crafted title from every genre.
@jason_tas
Previous Join The Crew on Xbox One and PS4 this week
Next Call of Duty: Advanced Warfare Day Zero edition in stores today