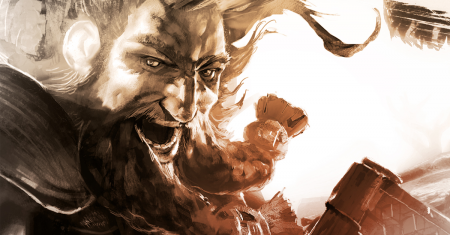 Blackguards is a game by German developer Daedalic Entertainment based on the role-playing game “The Dark Eye”. Unlike most stories where the player-controlled character is a hero guided by chivalry and kindness, Blackguards deviates from the norm by putting you in total control of your character’s destiny as the character encounters the various plots, twists, and betrayals in the game. The choices the player makes affects the player-controlled character’s moral compass and, depending on those choices, could either lead the protagonist to salvation or ruin… all while killing off a few schemers and traitors along the way or not, the choice is yours to make.

Blackguards is a turn-based tactics game reminiscent of games like Final Fantasy: Tactics, and plays and feels like Agarest: Generations of War in that the game’s various scenarios do not have a fixed outcome and the decision the player-character makes affect the way the story unfolds. The player could work towards slowly becoming colder and crueler or the player could work towards the path of a traditional hero, not unlike the protagonists found in Agarest and Final Fantasy.

The premise of the game is simple – the player-character is employed by royalty and one day, he stumbles upon the Princess being preyed upon by a wolf. The Knights find the player standing over the Princess’ corpse and he is captured and tortured for information that the player-character claims that he does not know. The game begins here as he tries to escape the prison and in doing so, befriends two other criminals – Naurim who is a smuggler and Zurbaaran, a Black Magician.  The story is nothing special and isn’t one that hasn’t been told before, but what makes Blackguards a good game is not the unique nature of its story. Rather than narrative, its merits lie in its ability to tell that story. 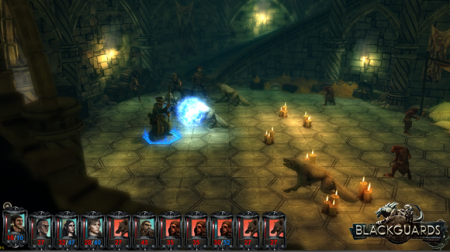 As I said, this is a turn-based tactics game so it plays like Final Fantasy: Tactics and Agarest. The battles have the player character and his party standing on terrain that they can traverse which are signified by grids and the goal of the game is to dispatch the enemies, make use of the interactive environment and overwhelm your opponents – tactically.

Okay, poor jokes aside, there are multiple actions that your party members can perform such as using defensive magic, offensive magic and even attacking with varying degrees of effort such as a ‘Normal Attack’ and a ‘Heavy Attack’. The characters do not have a set class nor are they restricted to learning any one set of skill – anyone can learn anything and anyone can equip anything in between melee and ranged weapons. With this in mind, each party can be set appropriately for any situation or need that may arise.

One of the game’s unique elements is the ability to choose how the story will progress. These moments are presented in between dialogues as choices akin to a Visual Novel like Fate/Stay Night or Clannad, and choosing either choice will result in a branch where other related choices are available. So if one is to proceed along the lines of a killer, then the next choices will reflect that path.

The music of Blackguards could probably be considered as better than the average soundtrack found in these kinds of games, and the author is often reminded of entries such as Fable, The Witcher and – bear with me here – The Elder Scrolls series. The music fits the various moods presented too, it’s somber in one scene and exciting and glorious in another. The battles feel and play better with minimal but effective music and the powerful songs that play as the player cuts his way through mystical beasts and duty-bound knights help set the tone for whatever that needs to be done – in any way possible.

Blackguards’ artwork and the general look of the game is nothing impressive, but they do get the job done. The author likes how the sprites look, but the background images of the towns and dungeons feel generic and overused… though they’re not bad, and with a little tweaking with regards to the colors and tones, the artwork could prove to be satisfactory. The art reminds the author of Dragon Age, but played in a Tactical Turn-Based format not unlike the aforementioned Final Fantasy: Tactics. The monsters look convincingly scary enough, and the Knights and Bandits and other dangers of the road are varied enough that one can tell the other at a glance. Most of the artwork and character models do tend to get overused though, the only difference being their palettes and equipment.

The various towns (haven to an adventurer fresh from the dungeons and its dangers) and locales look fine as well, but as said above, the backgrounds tend to look generic and overused. In fairness though, the utility and necessities of the town are done right. 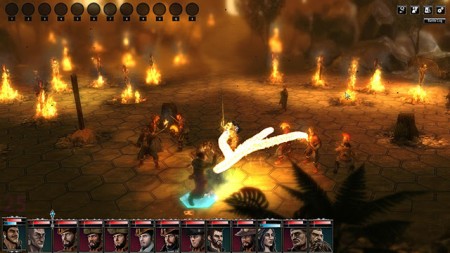 Towns each have their own taverns where the player character gets his quests or information, healers who will completely heal the player character and his party (at a premium price), inns where the party can rest up (for a cheaper price) at the cost of not having their afflictions or curses cured, and stores where the player character could stock up for their next big adventure. The dungeons, on the other hand, definitely could have used more work. Aside from the varying interactive objects in each dungeon room, the dungeons feel and play like a generic RPG dungeon where they’re nothing special if not for the impressive music that accompanies each room, as the player fights his way through the various threats and traps in wait.

The player party is written with balance and contrast in mind. Balance in that each character has his own utility in battle, whether they be a mage, defender or attacker. Each one has his own use and merits, so each one has to be used wisely. Contrast in that each one of the characters has their own story to tell and each one has their own agenda, and every one of them will try to persuade the player character to make decisions that will affect the story. Some of the characters may tell the player that attacking an enemy outright or performing an aggressive action is the way to proceed, while the others may try and convince the player character to act on diplomacy, but what unites this motley crew is not their usefulness in battle but it is their mutual circumstances; they are all outcasts and criminals. While some are branded as taboo for being born of a different race, others are branded as heretics for practicing a certain branch of magic. The bottom line though, is that they are all facing their own circumstances and carrying their own burdens, and it is here where the storytelling of the game is key.

I have to mention the voice acting in the game too here, because it’s wonderful. Each character sounds like how you would imagine them to sound, from the grumpy elf to the mysterious black magician to your confused and bewildered but courageous main character, everyone is fully voiced and the NPCs even provide some form of entertainment with their pre-battle taunts and misguided belief that people will actually stop moving when the police yell ‘freeze, sucker!’

While Blackguards may not have a unique storyline, everything else in it is engrossing and more than makes up for whatever faults the artwork or music may have. It is a wonderful gaming experience and people who loved Agarest or Final Fantasy: Tactics, and even Dragon Age or The Witcher, will definitely enjoy this one.