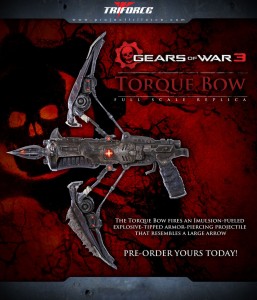 The Torque Bow was a deadly weapon that is wielded exclusively by the elite Locust warriors, the Theron Guards and occasionally by the higher ranking Palace Guards. It is quite distinct among Locust-produced weaponry. Functionally, the Torque Bow is a muzzle-loading coilgun in the shape of an archaic crossbow that fires a bolt that contains Imulsion in the head.

Pretty easily one of the coolest (not to mention biggest) replicas that the company has ever produced, the Torque Bow is pure Gears awesomeness. Massive in scale (have I reinforced that enough yet?), the Bow is an almost exact replica cast from the designs in the famed series of games for the Xbox 360 from developer Epic. While you won’t find any actual Imulsion in or around this bad boy, you will find a piece that makes itself the center of any collection instantaneously.

I’ve seen it displayed a few times at comic con’s in the Triforce booth, usually suspended and encased behind glass and I can tell you its definitely a sight to behold. It might be more impressive than the Locust Hammerburst we gave away last year and possibly even the Lancer that kicked off Project Triforce’s rise to popularity. If you want one though, you might want to act fast.

Triforce’s stuff tends to sell out quickly and then stay sold-out as the company doesn’t head back to the molds too often… actually, I don’t think they’ve ever done a second run on anything, but don’t hold me to that. Anyway, if you want one, click here and you’ll be able to plunk down that magical pre-order.

Jason's been knee deep in videogames since he was but a lad. Cutting his teeth on the pixely glory that was the Atari 2600, he's been hack'n'slashing and shoot'em'uping ever since. Mainly an FPS and action guy, Jason enjoys the occasional well crafted title from every genre.
@jason_tas
Previous Call of Duty: Advanced Warfare launch trailer looks heavily armed and graphically intensive
Next The Evil Within (Xbox One) Review