It’s… not my favorite horror movie. In fact, I actually didn’t enjoy Friday the 13th. I can see how that at the time that it would have been cool, but it did not age well, unlike other movies from the time (cough Nightmare on Elm Street cough). 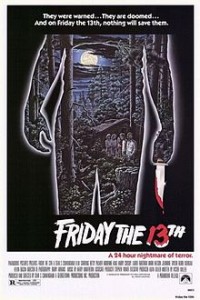 Please note- there are a few spoilers sprinkled around this review, so be careful (or go watch the flick before you read).

I’m not really sure where to start… okay, yeah, I do – THE ACTING. It was laughable at best throughout, as though the actors and actresses themselves couldn’t take their roles seriously. The only straight-out comedic character (intentionally, I mean) ends up pinned to a wall, and that was more or less where I started getting bored.

There isn’t much of a storyline to the movie either, honestly. It’s a typical plot where a group of people go to some abandoned place in the woods where lots of bad stuff has went down in the past, and then bad stuff starts to go down in the present. One can only use the excuse “maybe it was good for the time” so many times before it’s no longer legitimate. I honestly can’t remember any of the characters names and I’m not exactly sure what this movie was about. I want to say the camp headmasters but…. none of them were around too long. Then I’d say Jason, but he wasn’t even in the movie really. Maybe Mrs. Voorhees? She definitely gets the most character development. Oh I know, maybe it’s the Bowie knife, as it is the only prominent thing on the cover after all.

The deaths are pretty “meh” as well. Nothing too gruesome or creative… save for the surprise scene at the end, which I will be honest made me scream and fall out of my chair.

Oh and I’m not even going to talk about the music.

The greatest thing about this movie, and honestly the only part I enjoyed (no, it was not the…uhh…Monopoly game the characters played) was the twist at the end, which by now I’m sure you all know, but I won’t spoil that one. I was honestly not expecting it because, well, c’mon, why should I have?

There’s really nothing to say about the movie and I have no idea how this became a classic.

The deaths aren’t that brutal (I guess maybe for the time they could have been, but they didn’t hold the test of time), the characters are no fun, and the only really enjoyable part was the twist ending which honestly had me with my eyebrows raised. I would probably say watch the 2009 remake before I would suggest someone watch the original.

Friday the 13th, while I’m sure was good at some point, has failed to weather the storm of time and has fallen from its throne. By all rights it is still a classic, and the second one definitely earned it it’s crown, but as for how the first plays out I’m genuinely surprised there even was a second movie.