Dr Doom and the Scarlet Witch on the same side? Funny what a little Onslaught-powered Red Skull will do. 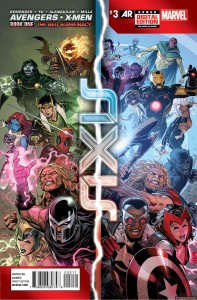 This October, it all comes crashing down. Today, Marvel is proud to present your first look insideAVENGERS & X-MEN: AXIS #3, the next blockbuster chapter in the premier comics event of the fall. Superstar creators Rick Remender and Leinil Yu present your first look at the apocalyptic conclusion toAct I: The Red Supremacy as teams splinter, hearts are broken, and the fragile alliance of A and X shatters once more!

Though they now stand united against a common foe, their fragile alliance is not enough to stem the darkness. Coupled with the powers of Charles Xavier, the Red Skull’s terror knows no bounds. Battered and broken, the few surviving heroes must put their faith in unlikely allies, and give rise to the most vile syndicate known to man. Can the Red Skull be defeated? And at what cost? Would you destroy the Red Skull if it meant losing the very last piece of Charles Xavier?

As one of the last remaining heroes, the Scarlet Witch is forced to join forces with Dr. Doom – the man who twisted and abused her power to cause M-Day. If she can’t, she’ll have to watch those she loves most die. And a twist of fate will return one of the Marvel Universe’s greatest villains from beyond.

The world as we know it is gone. The Inversion is here. Don’t miss AVENGERS & X-MEN: AXIS #3on sale in October!

Quite the apocalyptic event, Axis. Other than the big ‘booms’ , there are a lot of little sub-plots here too that longtime Marvel fans should appreciate as well, like the whole Doom/Wanda business and that somewhat mysterious “last piece of Charles Xavier” comment. Lots of stuff to like and follow along with as this massive crossover event rolls on through issue three.

From Rick Remender and Leinil Yu, Avengers & X-Men Axis #3 arrives on the racks on October 22nd.

Jason's been knee deep in videogames since he was but a lad. Cutting his teeth on the pixely glory that was the Atari 2600, he's been hack'n'slashing and shoot'em'uping ever since. Mainly an FPS and action guy, Jason enjoys the occasional well crafted title from every genre.
@jason_tas
Previous Need for Speed Rivals Complete Edition revving up in October
Next Explore the finer points of hell in Saints Row: Gat out of Hell