Dark Horse and Dynamite team-up to bring a meeting between The Shadow and Grendel to life. 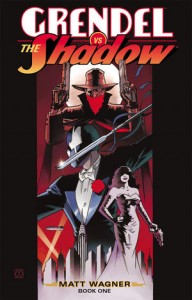 Sparks fly and bullets blaze when the original Grendel, Hunter Rose, is transported to 1930s New York and faces off with the original dark-night avenger, the Shadow! Two pulp-noir icons go head to head in this three-issue prestige-format series written and drawn by legendary Grendel creator Matt Wagner.

I have to admit I’ve never been a fan of Grendel, be he Hunter Rose or any other variety (there’ve been a few). I haven’t ever really give the character much of a chance though, since I was never drawn to any incarnation. I do like the costume though.

The Shadow on the other hand, is a long-time favorite of mine and still stars in some very cool monthly adventures, courtesy of Dynamite Comics. All that said, I’m very much looking forward to this one. It’s definitely more for the fact that The Shadow is in it, but Grendel vs The Shadow is a pairing that just feels right from a fan’s perspective, even from one who’s not crazy about the villain.

Lamont Cranston (Shadow) has taken on all kinds of criminal in his effort to clean up 1930’s NYC, and Grendel fits right into that- especially the Rose version of the character who’s as greasy and scheming as they come… starting to like him already… This is a real, old fashioned crossover event too, since we have Rose going from his time back to The Shadow’s, so it’s a real mashup of universes and sensibilities, even though we’re talking about time-shifting here and not dimensional rifts or something.

If the preview’s anything to go by, it should be an interesting ride indeed. Right off the bat I love the fact that in Grendel’s time, nobody really knows what happened with The Shadow, and he seems like he’s been completely forgotten to time, which is just how Cranston would have wanted it.

Grendel vs The Shadow kicks off on September 3rd, from Grendel creator Matt Wagner, who’ll be both writing and drawing the book, and colorist Brennan Wagner. Click the thumb to the left to read through the first few pages.

Jason's been knee deep in videogames since he was but a lad. Cutting his teeth on the pixely glory that was the Atari 2600, he's been hack'n'slashing and shoot'em'uping ever since. Mainly an FPS and action guy, Jason enjoys the occasional well crafted title from every genre.
@jason_tas
Previous Activision reveals Call of Duty: Advanced Warfare’s multiplayer modes
Next Dungeons & Dragons Starter Set (Tabletop Game) Review