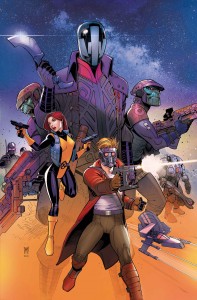 Today, Marvel is pleased to present your first look at LEGENDARY STAR-LORD #3 – the next issue in the hit new series from the fan-favorite creative team of Sam Humphries & Paco Medina! On the run across the cosmos – Peter Quill has landed in the clutches of the Badoon! Not really a great showing for the legendary space outlaw. Not to mention sharing a cell with a Spartax criminal and a Badoon child are not his idea of a good time. Luckily Peter’s got an ace up his sleeve – and her name is Kitty Pryde! But how? She’s on Earth! Wait and see, True Believer! Plus – who is the mysterious crime boss known as Mr. Knife and what does he want with the Legendary Star-Lord? Strap in and blast off for another out of this world issue when LEGENDARY STAR-LORD #3 hits comic shops and digital devices this September!

Though the movie has cooled off a little, the Guardians of the Galaxy are still hotter than hot and drawing all kinds of new fans to a team that was all but dead before their rebirth last year. Right at the center of that of course is Peter Quill, otherwise known as Star-Lord.

It’s no surprise either that the character would start to see some interesting crossovers from other Marvel heroes as the GotG’s section of the Marvel U starts to get all that much bigger. Shadowcat might seem like a strange person to cross into Quill’s territory, but she’s right on target with the general weirdness that the property exudes. Kitty is an X-Men too, and one with outer-space experience, so she kind of fits in an odd way.

It’ll be interesting to see where Humphries and Medina take Star-Lord down the line as the Guardians draw more attention from their involvement in the Marvel Cinematic Universe. A role that’s bound to only get bigger as Phase II continues into Phase III. For now though, you can catch the team’s leader in The Legendary Star-Lord #3, which’ll be hitting the racks on September 3rd.

Jason's been knee deep in videogames since he was but a lad. Cutting his teeth on the pixely glory that was the Atari 2600, he's been hack'n'slashing and shoot'em'uping ever since. Mainly an FPS and action guy, Jason enjoys the occasional well crafted title from every genre.
@jason_tas
Previous Teenage Mutant Ninja Turtles (Movie) Review
Next Gamescom 2014: Dead Island 2 trailer lives the dream