Home / Collectables / SDCC 2014: Hasbro focuses on Marvel and Star Wars, with a lil bit of Transformers mixed in

SDCC 2014: Hasbro focuses on Marvel and Star Wars, with a lil bit of Transformers mixed in

With Transformers: Age of Extinction having just seen release, you’d have thought that there’d been way more new Transformers stuff hanging around at Comic Con, but Marvel and Star Wars were indeed in plentiful supply. 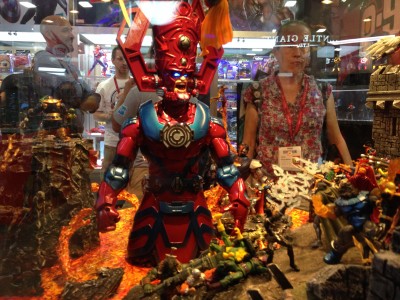 Hasbro had a terrific showing at the Con with all their major licenses present and accounted for. It’s really incredible to see just how many lines this company has, and when you see them all in one place, it’s impressive. Here we’ve got a look at some of the toy-maker’s biggest boys toy properties including Transformers, Star Wars, and Marvel Comics.

For Transformers, I was surprised by two things- the lack of impactful new items to view, and the combiners sets that Hasbro was showing off. I wasn’t aware these were even on the drawing boards, but we’re getting new combiner sets for both Superion and Menasor (who are both favorites of mine). The models looked pretty darn detailed too, which was also a nice surprise. Now we just have to wait on pricing.

As for Star Wars, the Black Series in both the 6″ (shown below) and 3.75″ sizes were on display. It was the larger scale though, that really impressed with stuff like the Speeder Bike and Jabba the Hutt deluxe sets (both available now) coming up big. Marvel had the usual show-topping displays including a plethora of new dual scaled figures and that massive diorama that fans have become accustomed to seeing.

Lots to see and lots of cool stuff for fans of all kinds to get excited for in the months to come.

Jason's been knee deep in videogames since he was but a lad. Cutting his teeth on the pixely glory that was the Atari 2600, he's been hack'n'slashing and shoot'em'uping ever since. Mainly an FPS and action guy, Jason enjoys the occasional well crafted title from every genre.
@jason_tas
Previous The Last of Us: Remastered (PS4) Review
Next Dan Adelman no longer working for Nintendo