Talion and the Wraith explained in new Shadow of Mordor trailer

Still a little fuzzy on Talion’s relationship with the Wraith he’s bound to in Middle-earth: Shadow of Mordor? Check out the newest trailer. Turns out, he was a pretty important ‘smith in the land of the living.

The trailer shows some of the aftermath of finding the ancient artifacts that are scattered around the world of Middle-earth in the game. Basically, each one unlocks new memories for the Wraith, ultimately leading up to him remembering who he was when he was alive (which was apparently a very long time ago). Now of course, he’s bound to Talion the Ranger where he’ll continue his quest to destroy Sauron for good.

There’s a distinct possibility here that Middle-earth: Shadow of Mordor could be the best game to date based on the Lord of the Rings property. Not only does the game shine graphically and have a terrific voice cast, but it looks like the combat and enemy manipulation (where you can make Orcs into your puppets) aspects are really well-done.

As a big time LotR fan myself, I’m watching this one very closely indeed and counting the days till the new September 30th release date when the game drops for the Xbox One, PS4, ,PS3, Xbox 360, and PC.

Jason's been knee deep in videogames since he was but a lad. Cutting his teeth on the pixely glory that was the Atari 2600, he's been hack'n'slashing and shoot'em'uping ever since. Mainly an FPS and action guy, Jason enjoys the occasional well crafted title from every genre.
@jason_tas
Previous Sunday Review: The BG archive for the week of 7/21/14
Next SDCC 2014: Heihachi has few friends in new Tekken 7 trailer 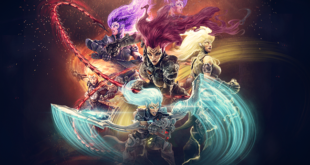 Xbox Games with Gold loads up with 4 new freebies

Games with Gold rebounds big time this month. Grab a quartet of quality titles in …