Dark Horse has opened up its full schedule for Comic Con 2014 and it’s a doozy. 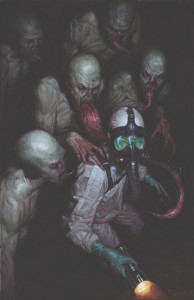 There are lineups and then there are lineups. Dark Horse has one of the latter set for this year’s Comic Con in San Diego, which’ll be starting off this coming week. Both in the booth and at the panel rooms, there’s a massive series of  signings and presentations planned for the show; I’m pretty sure it’ll be the biggest set of events planned by the company for the Con, which is seriously saying something.

It’s so big, that there’s actually a key of terms for the signing schedule, which consists of HB and ST. HB refers to the Hellboy stage, which has artwork by Hellboy creator Mike Mignola all over it, and ST means that the stage will be coated with the twisted creatures that populate Dark Horse’s newest breakout property, The Strain. Keep both terms in mind while you peruse the below.

Oh, and remember to stop by the booth to snag some of Dark Horse’s con exclusive stuff too, you don’t want to miss out on it.

A franchise spanning literature, comics, film and television, board games, and widely popular video games, The Witcher has touched millions with its engaging characters and exciting adventures. A diverse panel of experts discuss the many aspects of this renowned universe. Be the first to see new Dark Horse publications, view the first-ever live consumer demo of the upcoming The Witcher 3: Wild Hunt video game, and get a chance to meet the team behind Wild Hunt. Panelists include actors Doug Cockle (Geralt of Rivia, The Witcher franchise), Dark Horse Comics author Paul Tobin (The Witcher: House of Glass), Nick McWhorter, CD Projekt RED’s game developers Damien Monnier and Lukasz Wnek (The Witcher 3: Wild Hunt), and Rafal Jaki. Moderated by Spike TV’s Geoff Keighley.

Hot on the heels of the premiere of the Dark Horse comic turned television series The Strain, you are invited to explore the darker corners of comics. Horror has been one of the cornerstones of the Dark Horse publishing line for years, and 2014 will be no exception! Join panelists for an hour of all that is guaranteed to thrill and chill you, with resident horror junkies—editor in chief Scott Allie and PR director Jeremy Atkins—along with Eric Powell (The Goon), Mike Huddleston (The Strain), the first US appearance of Colder artist Juan Ferreyra, and more for sneak peeks, announcements, and other surprises along the way!

With the shifting landscape of comics today, this is your invaluable guide to breaking into the industry. Comics Experience founder Andy Schmidt (Marvel, IDW) is joined by writers Joshua Williamson (Ghosted, Nailbiter) and Joshua Hale Fialkov (The Ultimates, The Bunker), Dark Horse editor in chief Scott Allie (Hellboy), and IDW Publishing editor in chief Chris Ryall (Zombies vs. Robots) for what promises to be the best panel on breaking in ever!

Nearly thirty years ago, Dark Horse rewrote the rules of licensed comics with the release of Aliens, continuing the story lines of Ridley Scott’s iconic film franchise. Predator and the iconic crossover Aliens vs. Predator followed, with each series a hit. Now, the publisher partners with Scott again, to bring sci-fi epic Prometheus to comics. With just under two months away from the launch of the ambitious and highly anticipated crossover Fire and Stone, Dark Horse editor in chief Scott Allie, writers Chris Roberson (Aliens), Joshua Williamson (Predator), Christopher Sebela (Aliens vs. Predator), and the Prometheus team of Paul Tobin and Juan Ferreyra reveal just what’s in store for this grand universe!

Comic-Con special guest Mike Mignola celebrates the twentieth anniversary of his iconic creation Hellboy, star of comics, movies, and animation. Ask Mike about the Mignolaverse in this casual Q&A.

A lot has changed since Dark Horse first released Mass Effect: Redemption #1 back in 2010. For the first time, video game franchises found a legitimacy in comics that had been practically unheard of. With a line of video game–related comics and deluxe art books, including the best-selling The Legend of Zelda: Hyrule Historia, the publisher now works with some of the biggest studios and brands in the business. Join Dark Horse PR director Jeremy Atkins and editor Dave Marshall, Neil Druckmann (Naughty Dog), Jeremy Vanhoozer (PopCap), Adam Badowski (CD Projekt RED), Nick Thornborrow (Dragon Age), and writer Paul Tobin (Plants vs. Zombies, The Witcher) for news and announcements on all your favorite video game tie-ins!

Dark Horse’s continuations of Joss Whedon’s cult favorites (Serenity, Buffy the Vampire Slayer, Angel & Faith) remain some of the most-talked-about comics in the industry. Dark Horse is giving you an exclusive chance to hear all there is to tell about the current series of both Buffy the Vampire Slayer and Serenity from the series’ top talent, with Dark Horse editor in chief Scott Allie, Buffy Season 10 writer Christos Gage and cowriter and actor Nicholas Brendon, Serenity artist Georges Jeanty, and TV and comics writer Jane Espenson.

Dimension Films, in association with Aldamisa Entertainment, present exclusive footage from the highly anticipated sequel Frank Miller’s Sin City: A Dame to Kill For from acclaimed codirectors Robert Rodriguez and Frank Miller. Fans will get to experience the Sin City universe and take part in a special discussion with Rodriguez, Miller, and members of the cast.

Comic-Con special guest Stan Sakai, creator of Usagi Yojimbo, is interviewed by Dark Horse editor Diana Schutz about the upcoming Senso miniseries, The Sakai Project, and the return of the regular Usagi series after a two-year hiatus.

A ghoulish panel of horror freaks discuss the impact and influence of the classic Warren horror titles Creepy and Eerie on modern horror creators in film, TV, and of course, comics. Some special guests will add to your discomfort as Dark Horse announces plans for the fiftieth anniversary of Creepy. Moderated by Gemstone’s J. C. Vaughn (Overstreet Price Guide) and consulting editor and writer Dan Braun (Creepy). Panelists include sculptor Justin Mabry (Trick or Treat Studios), Chris Zephro (Trick or Treat Studios), and New Comic Company’s Josh Braun (Eerie). Throw in a couple of surprise Creepy artists and writers, and there’ll be quite a stew for you. Plus: awesome Creepy swag!

One of the hottest graphic novels of 2013, The Fifth Beatle: The Brian Epstein Story is now one of the most highly anticipated films, having secured the approval of Paul McCartney, Ringo Starr, Yoko Ono, and Olivia Harrison, along with unprecedented access to the entire Beatles music catalog. Fifth Beatle writer and producer Vivek J. Tiwary (Green Day’s American Idiot) introduces a series of very special guests for a discussion of The Fifth Beatle’s development and breaking news. Panel moderated by Patrick Reed (Depth of Field Magazine).

Join Emily the Strange creator Rob Reger and his cast of Strangers for their annual panel experience and get the insider scoop on the all-ages Dark Horse comic book series Emily and the Strangers, including sneak peeks at new artwork and story lines from upcoming issues. Hear some snippets of new tracks from Emily and the Strangers and see behind-the-scenes footage of the making of the “Calling All Guitars” animated music video. As always, audience participation will be encouraged and perhaps enforced with plenty of rewards for being strange . . . Oh yeah, and some Q&A with updates on the feature film development. Be there or get lost!

Nearly thirty years ago, Dark Horse arrived with an agenda different from that of any other publisher in comics. The young company was founded on the belief that comics creators should have the option to retain the rights to their own work, and it continues to be a highly fertile breeding ground for new characters, concepts, and more! Now, the publisher is poised to make headlines again with some of the biggest news about new original work since Frank Miller brought Sin City to the pages of Dark Horse Presents! Join panelists for an exclusive look at upcoming and unannounced creator-owned work from some of the biggest names in and outside the industry! This will be the comics panel everyone will be talking about at this year’s show!

Get a sneak peek at the third episode of FX’s brand-new series, The Strain. In episode 3, “Gone Smooth,” Eph and Nora fight to save Captain Redfern’s life before coming face to face with the horrifying effects of the virus. A spike in rat attacks signals Fet that something inexplicable is happening deep below the city. Released from jail, Setrakian begins his own merciless plan to stop the spread of the disease. Written by Chuck Hogan; directed by David Semel. After the screening, join series creators Guillermo del Toro (Pacific Rim) and Chuck Hogan and show runner Carlton Cuse (Lost), along with the cast members Corey Stoll, David Bradley, Mía Maestro, Sean Astin, Kevin Durand, Jonathan Hyde, Richard Sammel, Miguel Gomez, Ben Hyland, and Jack Kesy.

Jason's been knee deep in videogames since he was but a lad. Cutting his teeth on the pixely glory that was the Atari 2600, he's been hack'n'slashing and shoot'em'uping ever since. Mainly an FPS and action guy, Jason enjoys the occasional well crafted title from every genre.
@jason_tas
Previous Sunday Review: The BG archive for the week of 7/14/14
Next Cyanide and Focus Home launch new Styx site, complete with trailer