Home / Comics / The Death of Wolverine gets a ‘mortal’ variant

The Death of Wolverine gets a ‘mortal’ variant

The end of the X-Man known as Logan is coming and Marvel Comics is taking him out with a special variant cover by Ed McGuinness. 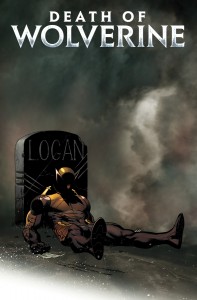 It’s the storyline that has the whole comic industry buzzing, and today Marvel is proud to officially unveil the ‘Mortal Variant’ to DEATH OF WOLVERINE #1! Gorgeously rendered by superstar artist Ed McGuinness, the cover captures Logan as he reaches the end of his long life. This jaw-dropping cover can be ordered through the previously announced Exchangeability program.

Written by chart-topping writer Charles Soule and blockbuster artist Steve McNiven, this landmark limited series chronicles the iconic mutant’s grisly final days as he battles through a gauntlet of his greatest foes. Left without the help of his mutant healing factor, the once indestructible killing machine known as the Wolverine has found himself mortal for the first time in a long time.

As mainstream media buzz continues to build around this highly anticipate series, retailers are encouraged to check their Marvel Mailer for ordering and exchangeability information for this exclusive cover.

What does a world without Wolverine look like? Find out when first issue of DEATH OF WOLVERINE hits comic shops this September!

Reguardless of where you sit on this one, this is a big book. Though I doubt Logan will stay ‘dead’ for long, any book that sees the death (no matter how temporary it might be) is a huge deal and Death of Wolverine is no different. Wolverine has been a perennial favorite of comic fans and has, at many times, been the most popular character in all of comics. To see him slumped down at a tombstone is a jarring image to say the least.

Whether he stays there or not, well… just enjoy the story for what it is- and enjoy the McGuinness artwork that adorns this alt cover too. You can find both this variant and the standard edition cover on the racks on September 3rd.

Jason's been knee deep in videogames since he was but a lad. Cutting his teeth on the pixely glory that was the Atari 2600, he's been hack'n'slashing and shoot'em'uping ever since. Mainly an FPS and action guy, Jason enjoys the occasional well crafted title from every genre.
@jason_tas
Previous Raptr’s most played games for May include the usual suspects
Next Steam Summer Sale is now threatening wallets everywhere