Starling focuses on a woman trying to get by in the modern world… who’s also a superhero. 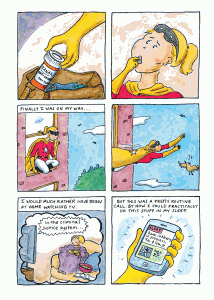 Starling by Sage Stossel could be considered as a modern take on a female superhero, a sector of comics that has had many issues in the past years conserving the changing views of gender equality in the world.  It’s not so much a power fantasy wherein the hero can be expected to always save the day, but rather shows the emotional baggage such a hero might carry in our everyday world.

The main plot could be considered generic by some, she’s a hero who must save the city from every kind of crime, dealing with a next to useless police force. She also deals with a very difficult and imbalanced life. For example, before she can attend to a crime, she has to pop a few Xanax less her anxiety get the better of her. She has the powers of speed, flight and to send electricity from her hands to aid her, although the latter proves to interfere with her love life for fear of shocking anyone she hugs.

Her life is not limited by her duty as a hero either and she must frequently deal with her jealous coworker Jason, who attempts to steal her work at a marketing firm. Being paged at every hour of the day causes her such mental distress that she says its due to irritable bowel syndrome, a less then pleasant lie. She also deals with memories of a childhood that was less than great, as she grew up in a house where her mother hoarded cats as if there was no tomorrow. You can almost imagine the stench of cat just thinking about living in such a home.

The novel has some pretty good art considering it’s the first comic by Stossel, utilizing a form reminiscent of watercolors on paper, very low-fi but shows detail when needed, and considering the subject matter of a dysfunctional hero, it fits the theme perfectly.

All in all Starling is one of the more interesting graphic novels to have come out in the past few years, focused much more on what make a superhero tick then just detailing their heroic exploits. This is a great recommend for those who want to see more from a hero then saving people and fighting crime and appreciate the highs and lows of an everyday person who just happens to have the burden of superpowers.

A young lad on a magical journey through the dark and terrifying world known to many as "the industry". From his hellish prison, Isaac can hear the cries of pain and suffering from those who came before him, only to hear their hearts stop in utter terror. Video games aren't all fun and games kiddies.
Previous The Sentinel of the Spaceways goes home in Silver Surfer #4
Next The Witcher: House of Glass issue 4 rides into stores