With the Mario Kart 8 demo now out, players get to try out Nintendo’s upcoming Wii U title for the entire weekend between 12 to 4 pm. 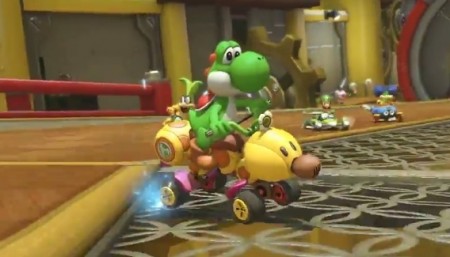 No matter how many years I’ve played Mario Kart, a new one always seems to take me some time for me to get used to; Mario Kart 8 is no exception. For a little while I found myself making turns too sharply, but thankfully for me it was on 100cc, so the game was more than generous enough to forgive my mistakes. Once I got the hang of things, I experimented with a number of different karts. As expected the heavier ones don’t take turns as sharply as the smaller vehicles, and they’re better off road. The selection wasn’t too big, but for a demo I was quite impressed with the amount of content packed in.

There were eight courses to choose from, all spanning across different cups. My personal favorite course out of the bunch would have to be Cloudtop Cruise. The stage had many fun twists and turns to take, making for a decent challenge; a close second as far as quality goes is Sunshine Airport in my humble opinion. I didn’t get a chance to try out all items, but that’s probably because most of the time I was in first place. Looking back I probably should have deliberately slowed down just to try more out; but the ones I did use were classic Mario Kart quality. The horn has quite the wide radius, making it a deadly weapon to wield in races. I collected it twice and quickly dispatched nearby opponents, even destroying the items one of them carried.

The piranha plant had a generous range of attack, lunging at karts quite far from me, but not so much that it was a broken item. You still had to drive well, and couldn’t just rely on it to pull you through like the chain chomp in Mario kart Double Dash. The speed in Mario Kart 8 is quite impressive, even on 100cc; for curiosity’s sake I played Forza on the Xbox One near me in the story. My sense of speed while playing MK8 was indeed better than the racing game that boasts a blistering rate of 100 mph. The game even looks better graphically, and that’s saying something coming from the console that’s deemed “underpowered” by many. It also runs smoothly; at a silky 60 frames per second it was a treat for the eyes.

It’s looking like this will be another winner from Nintendo; if they can keep up the momentum of releases such as this for the next couple of months, then perhaps the Wii U can garner a healthy amount of sales.

Well, my name's Christopher Deleanides as you all know and I'm the Nintendo Editor here at BG. I've been playing video games since 1992, and I've been a Nintendo fan the entirety of those years. My love for video games as well as Nintendo hasn't changed, and probably never will. The only thing that comes close is politics, as I'm very deeply involved in both local and international issues.
Previous Saturday Radar: GamesRadar’s best for the week of 5/12/14
Next Sunday Review: The Brutal Gamer archive for the week of 5/12/14