Home / Comics / World War Wendigo? The Amazing X-Men are in for a world of hurt in issue #8

World War Wendigo? The Amazing X-Men are in for a world of hurt in issue #8

That lovable cannibal from the frozen north hasn’t been seen in the Marvel U for a while now, but the Amazing X-MEn are about to run into a whole herd and then some. 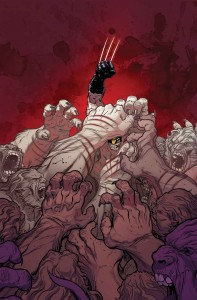 New Creative Team! This June, fan-favorite X-writers Craig Kyle and Chris Yost join blockbuster artist Ed McGuinness for an all-new arc of Marvel mutant mayhem in AMAZING X-MEN #8! Though Nightcrawler has returned to them, there is no rest for the X-Men. A return trip to Canada leads Wolverine to a hairy situation as the search for a missing friend brings him face to face with a horde of bloodthirsty Wendigo! One Wendigo is enough to stop even the strongest heroes dead in their tracks. What hope to the X-Men have against an entire army? Even the combined strength of  the X-Men and guest stars Alpha Flight may still not be enough to stop the coming assault! Don’t miss both teams prepare for battle as the pulse-pounding new ‘World War Wendigo’arc kicks off this June in AMAZING X-MEN #8!

I love that cover.

Anyway, I don’t think we’ve ever seen multiple Wendi’s before in an X-Men book… And even if we did, it was nowhere near this many. Amazing X-Men #8 kind of feels like old times too (except for Wolvie’s condition) as we get Logan, Nightcrawler, Colossus, and the rest of the team heading due north for a meet up with Alpha Flight (Canada’s number one super-team).

The reason? There are Wendigo’s, a lot of Wendigo’s, and they’re on the move and heading for civilization. This one isn’t going to be pretty.

Catch Amazing X-Men #8 when it devours the racks on June 4th from the brand spankin’ new creative team of Craig Kyle, Chris Yost and Ed McGuinness.

Jason's been knee deep in videogames since he was but a lad. Cutting his teeth on the pixely glory that was the Atari 2600, he's been hack'n'slashing and shoot'em'uping ever since. Mainly an FPS and action guy, Jason enjoys the occasional well crafted title from every genre.
@jason_tas
Previous R-Type Dimensions coming to PS3
Next Dying Light pushed into 2015