The Brotherhood returns in All-New X-Men #27

The classic X-Men versus Brotherhood feud takes on new life with the new generation of characters and a powered-up Jean Grey freshly back from her ‘trial’ in the Shi’ar Empire. 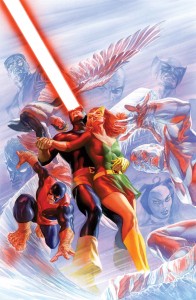 This May, the future Brotherhood of Evil Mutants has returned, and Marvel is proud to present your first look at ALL-NEW X-MEN #27 – from the New York Times Bestselling creative team of Brian Michael Bendis and Stuart Immonen. Last seen in the blockbuster Battle of the Atom, Raze, Molly Hayes, Charles Xavier III and the Ice Hulk have gone underground, plotting their next move against the All-New X-Men! Jean Grey returned from space different, manifesting new and uncontrollable powers. Could it be that the Brotherhood was right about her? As they prepare to make their devastating move against the original X-Men, these two teams will come to Earth shattering blows once more! When the dust settles, who will be left standing? Find out when ALL-NEW X-MEN #27 explodes into comic shops this May!

Well it was only a matter of time before the Brotherhood reared their futuristic-heads in All-New again. I’m not the biggest fan of the lineup, but you have to admit that its neat to see the matchup of Brotherhood vs X-Men being a fairly common theme once again.

After all, it’s been years since Magneto was the bad guy that we all know and love and even longer since he had a ‘Brotherhood’ of any kind under his command. So to see the name at least used in conjunction with a super-villain team is cool. And what can you say about the All-New X-Men?

They’re not everyone’s cup of tea, that’s for sure, but the group is an ode to the classic feel of the X-Men teams of years ago and I like ’em just for that reason alone. As for the latest developments of Jean getting a power boost, well, we all know where we think that’s heading. Whether it actually does or not is anyone’s guess. If the Phoenix does manifest in some way at least though, the Brotherhood is in for  world of hurt.

Find out what happens when All-New X-Men #27 hits the racks from Brian Michael Bendis and Stuart Immonen on May 14th.

Jason's been knee deep in videogames since he was but a lad. Cutting his teeth on the pixely glory that was the Atari 2600, he's been hack'n'slashing and shoot'em'uping ever since. Mainly an FPS and action guy, Jason enjoys the occasional well crafted title from every genre.
@jason_tas
Previous Bethesda faces social firestorm over use of barbed wire… according to The Onion
Next This week’s Nintendo Download brings classic titles and some sale prices on Ubisoft games