The ’80s and ’90s were a treasure trove of great cartoons. There was no shortage of awesome stuff to watch on Saturday mornings or weekdays after school. What’s weird is that, seemingly most all of the best stuff never got an video game love.

I would have jumped at the chance to play a game starring some of the biggest characters from the best shows to air when I was a kid, but most of them never even got a sniff of a console or a PC. Sure in the years since, we’ve gotten excellent games based on the Transformers, some good ones starring the Ninja Turtles, and a plethora of titles starring the various superheroes that populated the cartoon programming blocks on network TV back then. Even so though, there are more than a couple that still find themselves left out in the cold.

This week in the Feature Friday spotlight, I thought we’d take a little trip back in time and check out those great properties that still haven’t made the jump into interactive entertainment- and could easily still hold up and captivate the modern generation if they did. So with that in mind, lets jump on down to number 5 on my humble top five list of what I think is the best of the best:

5.) Voltron: Defender of the Universe – Not content to just protect a planet, or maybe a star system, Voltron was the defender of the universe. Think about that for a second. Back? Okay cool- basically, I’m thinking that a Voltron game might not be all that easy to pull off and that’s probably why it hasn’t been done. When you think about it, the Voltron Force (the four guys and one gal) who piloted the lions never really did anything on their own. Pretty much all the action was up to the individual lions, and then when they got their backsides handed to them- they formed the big guy to lay the smackdown properly.

I still believe there’s more than enough material there for a great game though. Although it might take some doing, and maybe a little change here and there to the property to do it, it could be great fun. What I’d do is set the bulk of the game in the third-person action mold, following your choice of pilot or lion depending on what the narrative called for. Each ‘level’ would then be capped off with a boss battle scene of kaiju-stomping, ro-beast bashing starring the one and only Voltron.

There’s probably a lot more you could do with it too, but this is just off the top of my head and more than enough when you consider that the main drawing card most gamers would be into the game for in the first place would be solely to play as Voltron. Even a fighting game might work well in that respect… though I can’t imagine anyone would want to play as any character other than Voltron. 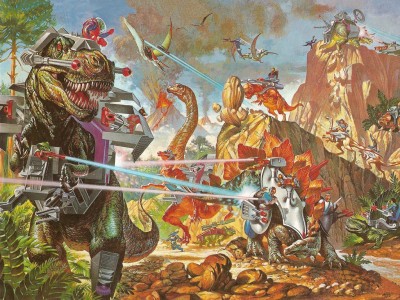 4.) Dino Riders – Aliens fighting humans in Earth’s ancient past while riding Dinosaurs that are outfitted with high-powered weaponry. Is there something in that sentence that’s not to be liked? If so, I missed it.

The theme of Dino Riders was as complex as anything on TV at the time. Animalistic ET’s pursue a band of humans through a portal to prehistoric Earth. Once there, their ships are trashed and they set up shop and vie for control of the landscape. In order to do it, they commandeer the local wildlife, which just happens to be the terrible lizards that pretty much every kid I knew growing up was infatuated with.

While the brutal Rulons enslave the beasts with mind-controlling ‘brain-boxes’, the humans forge actual relationships with the giant animals and almost work with them to beat back the alien aggressors. It was 100% pure awesome and would make a phenomenal open-world game. All you need to do is set the player in the role of a human soldier and task them with exploring Pangea and finding a way to stop the Rulons once and for all. Add in a mess of side-quests and different Dino’s to take control of and you’ve got an instant winner that’s sure to please fans and get the horrid stench of the last Turok game out of your nostrils too.

3.) Exo-Squad – Easily one of the greatest cartoons of all time, it might also be one of the most under-appreciated. In the distant future, humanity has colonized the solar system and terraformed Mars. Advanced mech-suits called E-Frames make tasks easier and pretty much make anything possible. It’s a golden age for the human race. Things start to turn though when they create a worker race of clones called Neo-Sapiens to do the daily tasks that humans as a lot don’t really want to be involved with anymore. Needless to say, the giant, genetically superior in almost every way, ‘Sapes soon realize that this is not the life for them. The revolt is swift and crushing for mankind.

The system is thrown in to chaos and the Neo-Sapiens quickly take the upper hand and push the last remaining human military fleet into hiding. If that sounds like a pretty great storyline, that’s because it is. There’s pretty much every sci-fi trope you can think off in Exo-Squad including space-pirates who don’t care who’s fighting who and even aliens who never got a full chance to be seen as the show was cancelled before the writers could factor them in.

Exo-Squad is begging for a comeback and a video game is a great way to do it (and the Sega Genesis title doesn’t count). Start right form the beginning, or even as the war is winding down and the mysterious alien forces are arriving, either one works as I’d both love to fight some video game Neo-Sapiens and equally want to see how the story moves past the peace between the factions and deals with the alien threat.

I’d give this one a mission-based structure with action set both in space and planet side. Gamers could chose between any of the star Exo-Squad members and outfit and upgrade their stock E-Frames as they see fit. Jackable E-Frames would be great here too with Titanfall-like in and out of the suit action a must.

2.) G.I. Joe: A Real American Hero – Yes, I know that there was a game based on the live-action movie from a few years back, but lets be honest here- that really was as far from being ‘G.I. Joe’ as you can get. What I’m talking about here is the Joe of old, and that’s a cartoon that’s never ever been done justice as a game. 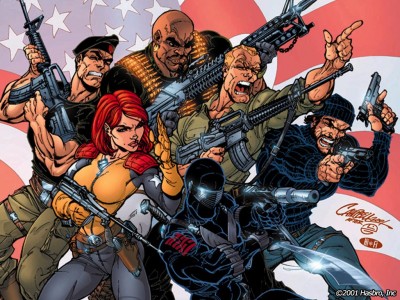 I’d make G.I. Joe a first-person shooter (with an optional third-person view) and plenty of vehicles to drive/pilot. The game would have to have a wide array of missions that’d take the player on a trip through the whole Joe universe too. Imagine taking it to Zartan and the Drednoks in their swamp base, assaulting Cobra Island, and raiding the Terrordome- there are almost as many possibilities as there are characters that you could play as. If you really wanted to go nuts with it, you could even use locales form the classic Larry Hama-penned comics!

Oh, and the multiplayer mode almost writes itself with maps based on some of the greatest set pieces in Joe history and a million and one character skins you could deck yourself out in. Pure gold. 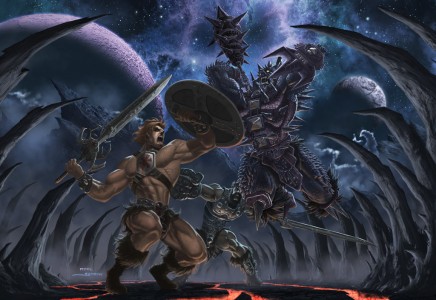 1.) He-Man and the Masters of the Universe – If you know me, then you probably already knew this was going to be number one. He-Man combined sword and sorcery, sci-fi and everything in between to make one of the most unique and interesting worlds to ever have birthed a toy line and cartoon series. It honestly still boggles my mind how this hasn’t been the focus of a legion of video games by now, but it’s almost completely slid by unnoticed.

Sure there was a pretty cool mobile game a few years back and an all-around awful GBA and PS2 title, but that was about it. I mean, this show was mega-popular in the ’80s and there was nary a NES game in sight. How’d that happen?! However it occurred, it needs to be rectified post-haste. Give me a serious in tone (if you don’t think that’s possible, check out the current DC-published comics) adventure that sets He-Man out across Eternia in a massive quest.

Action/RPG would be the genre of the day here and the world of Eternia should be monstrous with hazards and enemies everywhere. Based off of the DC Comics, original cartoon show, or even the cardbacks of the Masters of the Universe Classics action figures from Mattel (which are awesome) there’s no end to the fantasy monsters and technological terrors that the wielder of the power sword could combat. The property has such an interesting mix of themes too that a developer could really do just about anything with it and have it fit right in with the canon.

Musts would be the Snake Men, Hordak and his evil Horde, and (of course) Skeletor and his warriors, who’d be the main heavies. Stick some Battle Cat riding action in there a’la Darksiders horseplay, upgradable weapons and armor (Thunder Punch and Battle Armor!), and some of the more famous locations from the show and the toy line and you’ve got a winner that could easily be a triple-A title and then some.

So that’s my list. My top five runs the gamut from fantasy to science fiction and just about everything in between; but you know that was one of the best things about the cartoon arm of the entertainment industry in the 1980s and ’90s. The imagination and creativity behind these shows and more was just stunning and not something that you see on television today.

Are there even Saturday morning ‘toons anymore? And I mean enjoyable shows, not poorly animated and unexciting ‘learning’ programming. I know that has a place too, but sometimes fun is just fun, and I don’t see all that much of that for kids these days. But I’m getting off on a tangent here and we’re not quite done here yet. Yes, the main bulk of the article is over, but as usual I couldn’t just leave well enough alone since there were a ton more great shows that sprang to mind as I was writing this. They just fell short of making my cut and it does;t seem right to not mention them at the very least.

See if you agree or disagree with any of the programs below (or what I waxed poetically about above) and add your favorites in the comments section! I’d love to read ’em!

Jason's been knee deep in videogames since he was but a lad. Cutting his teeth on the pixely glory that was the Atari 2600, he's been hack'n'slashing and shoot'em'uping ever since. Mainly an FPS and action guy, Jason enjoys the occasional well crafted title from every genre.
@jason_tas
Previous Behold, Rise of the Triad gets its Doomstick
Next Survival horror never sounded so creepy as in Alien: Isolation