Is EA and Respawn’s Titanfall good enough to convert an FPS non-believer? The answer might surprise you…Although FPS games are not my favorite genre by far, there is one that I thoroughly enjoy: Titanfall. Developed by Respawn Entertainment, Titanfall hit shelves earlier this month and has been growing rapidly in popularity. At first, I viewed it like “Well, just another boring FPS game to not look forward to.”, but then I played it on my brother’s Xbox One and I immediately fell in love.

Titanfall starts out telling the typical story of a war-torn human future between two factions. Nothing really special about the campaign, other than the fact that beating it will unlock the strongest Titan: The Ogre. After the intro ends, it leads into a neat little tutorial, explaining how everything works, and leading you straight into the campaign.

The main draw to Titanfall however, is the fact that the entire game (even the campaign) is multiplayer. And the servers? Yeah, they’re all fantastic. I haven’t once disconnected or even had any issues joining a match on either the Xbox One I played on or my PC. In fact I really only have one complaint, and it’s probably one you’ve already heard: no private matches, or private teams. It seems like it would be nice to be able to create at least a private team, if not a whole match, that consists only of my friends, but apparently Respawn had other ideas.

Game modes are pretty straightforward. The list of selectable modes is populated by Attrition (typical Team Deathmatch), Last Titan Standing (everyone starts out as a titan and you only get one life per round), Hardpoint Domination ( players fight for control of spefic areas to earn points and win the game), Capture the Flag (pretty self explanatory isn’t it?), and finally Pilot Hunter, which is basically the same as attrition, but killing minions doesn’t give you points. “Minions? There’s Minions in this game?”, you ask; “Yes, yes there are.” I say in reply.

It turns out that League of Legends isn’t the only game with the ability to feature Minions (though they are referred to as ‘Grunts’ in Titanfall. Killing Grunts goes to a specific kill marker. There are three kill markers in all: one for enemy players (referred to as Pilots), one for Titans, and one for Grunts. These NPC enemies are basically there for gun fodder, and sometimes used for distractions, however they are mostly there for people who want to play the game, but lack the skill to be able to do good against fellow Pilots (like me).

Grunts also serve another purpose, in Attrition, killing a Grunt will give one ‘Attrition Point’, so basically it notches up your teams score by one, this actually comes in handy quite often. In one round, my team was behind by about thirty kills, so I called down my Titan, climbed in, and found a nice group of Grunts. After stomping on all of them, I moved on to another pile, and repeated this process multiple times; by the end of the match, my team ended up in the lead by about 15 points.

At the time of this writing, gun and Titan customization is rather limited. There are a couple unlockables for each gun, but nothing really fantastic. That might sound like a complaint, but in a way, it is kind of nice to know that if you run across someone using the same gun as you, the two of you more than likely have the same attachments, making it a battle of skill and not purely stats.

I would comment on the music, but the more that I think about it, I don’t particularly remember any. I feel like a game like this would go good with say, heavy metal music (without vocals of course, lest it be overpowering), or maybe just some industrial rock. So take that for what it is and pop something  on for background music to set your own tone. 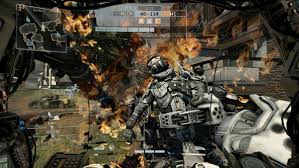 Something about sprinting through an area along the walls, and popping off some shots at an enemy whilst jumping into a gigantic robotic machine of death just gets me excited (and if that didn’t excite you, I don’t know what will). If you have a mid-level (or better) PC or an Xbox One, buy Titanfall; if you have an Xbox 360, you’re gonna have to wait until April 8th.

I cannot stress enough that, while this is a little early in the year to be making claims for game of the year, I think Titanfall has one heck of a shot. Now if you will excuse me, Titan incoming in 30…29…28…