Star Trek: The Next Generation beams into Infinity Wars

Lightmare Studios’ digital trading card game is getting a fresh infusion of some of the best sci-fi to ever hit the airwaves as Star Trek: The Next Generation ships and characters arrive. 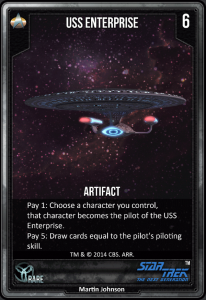 “We are a small indie team but our latest incarnations, honoring the timeless Star Trek: The Next Generation, have never made me so proud of our crew,” exclaimed Lightmare Studios CEO, Elphie Coyle. “This, along with our recent expectation-shattering success on Steam Early Access, the upcoming Mobile Companion App, and our supportive fans, makes me believe that we are poised to make solid dent in the TCG Multiverse with Infinity Wars.”

A small team, but a big property. STTNG is seeing a little bit of a comeback as of late and is easily one of the best loved Star Trek shows in the franchises long and storied history. Now fans will be able to take their favorite characters, factions, and ships into battle in the turn-based, digital collectible card game. There’s even a new mechanic in ‘piloting’, which should add in yet another layer of strategy to the popular CCG.

If you’re not familiar with Infinity Wars, here’s a rundown of what you can expect from the game:

Jason's been knee deep in videogames since he was but a lad. Cutting his teeth on the pixely glory that was the Atari 2600, he's been hack'n'slashing and shoot'em'uping ever since. Mainly an FPS and action guy, Jason enjoys the occasional well crafted title from every genre.
@jason_tas
Previous Marvel sends another round of books back to the presses
Next Valiant Comics’ heroes come to tabletop gaming