Unravel the mystery that is ‘steampunk’ with Steampunk: An Illustrated History of Fantastical Fiction, Fanciful Film and Other Victorian Visions. 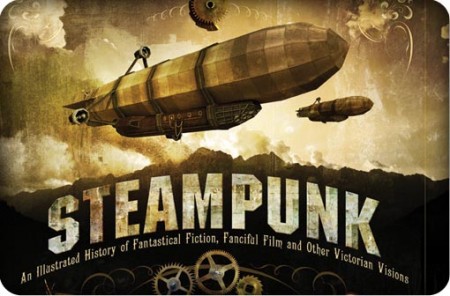 Steampunk seems to be one of those genres which makes full use of its long and storied history. Even though it’s only been around as a true genre for a short while, its basis on a Victorian setting means you can find in various forms. From books, to movies, to even music, Steampunk has become an important part of nerd culture, contributing to our technological and historical imaginations.

Steampunk: An Illustrated History of Fantastical Fiction, Fanciful Film and Other Victorian Visions, besides having an incredibly long title, is considered one of the best collected histories over the Steampunk genre. It features a long and in-depth look into the origin and present forms that Steampunk has taken on, from the first trailblazers as Jules Verne and H.G Wells to more recent writers such as Mark Hodder.

The book is actually quite gorgeous. It is a hardcover with artwork on the front that’s very typical of the theme, such as multiple zeppelins. The inside is no less interesting; with large color images helping show the various forms Steampunk has taken in the past. The text is large and spread out too, so it doesn’t become difficult to look at.

It’s a big book so you won’t find yourself crawling into bed with it, but well worth the asking price if only to look at its gorgeous gallery of Steampunk related images. 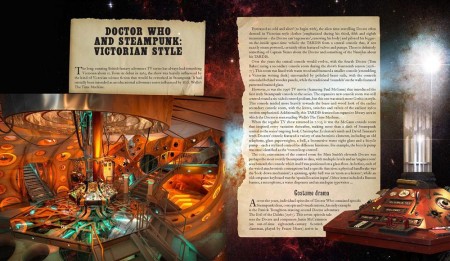 Steampunk is organized chronologically, with each particular chapter focusing on one specific Steampunk topic. Be it art, film or (as some of you would like) an entire chapter focusing on Japanese Steampunk, you’ll probably find it within these pages. The book labels all the images as well, so you always know what you are looking at, and it also provides you with backgrounds of all the major Steampunk artists.

For those of you who care enough to learn everything there is to know about Steampunk, this is the book for you.

A wealth of information and enough visuals to keep this from becoming a textbook, Steampunk: An Illustrated History of Fantastical Fiction, Fanciful Film and Other Victorian Visions is the definitive Steampunk experience. Even though a little pricey, its great design will make it one of the more interesting titles on any bookshelf guaranteed.

A young lad on a magical journey through the dark and terrifying world known to many as "the industry". From his hellish prison, Isaac can hear the cries of pain and suffering from those who came before him, only to hear their hearts stop in utter terror. Video games aren't all fun and games kiddies.
Previous Grey Goo oozes onto the RTS scene this Fall
Next Bound by Flame scorches consoles and the PC in May