Bound by Flame scorches consoles and the PC in May 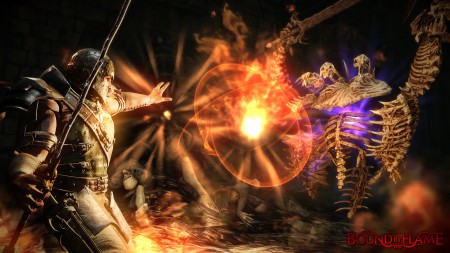 Is it me, or is Bound by Flame looking pretty darned impressive? This week’s shots released by Spiders shows off some of the game’s bestiary, which hadn’t been glimpsed previously, and really looks fantastic- and a huge improvement over the sci-fi Mars War Logs.

Each monster in the game will have specific skills and attacks as well as behaviors that are designed to force gamers to mix up their attacks and strategies depending on what beasties that encounter and group dynamics. It’s set to be a deep combat system for players as well as they’ll have access to both close combat moves and a magic system.

Focus Home, who are publishing the game, and Spiders aren’t saying much right now about the combat in Bound by Flame, but you can expect an in-depth look at it in a trailer that should be popping up some time soon. For now though, have a look at the screenshots below and mark off May 9th on the old calendar; that’s when Bound by Flame will be hitting the PS4/3, Xbox 360, and PC.

Jason's been knee deep in videogames since he was but a lad. Cutting his teeth on the pixely glory that was the Atari 2600, he's been hack'n'slashing and shoot'em'uping ever since. Mainly an FPS and action guy, Jason enjoys the occasional well crafted title from every genre.
@jason_tas
Previous Steampunk: An Illustrated History (Book) Review
Next D-Link Gaming Router AC1300 (Hardware) Review