Capcom and developer Double Helix bring a rebooted Strider to consoles that not only updates, but outdoes and improves upon envy version that’s come before (including the arcade original) in every way. 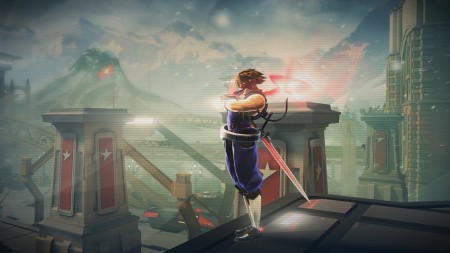 The arcade is probably where a good deal of gamers (at least the older set) know Strider from. Capcom’s classic side-scroller about a lone, blade-wielding ninja going up against an oppressive eastern-European regime only first launched there though, and isn’t where I had my first encounter with the game.

No, I first played through the dismal landscapes of Kazakh City on the Sega Genesis back in 1990. I wasn’t the biggest fan of it either since it pretty much kicked my butt on regular occasion and I never really got all that far in it. Since then, the game has seen a dozen or so re-releases on a dozen or so platforms and I’ve actually come to appreciate it a lot more for the side-scrolling gem it is.

My favorite was probably the PSOne release of the sequel (Strider 2) which came with a copy of the original game in the box (both were fun). This newest incarnation of Strider though, is a whole different animal. Capcom has let developer Double Helix have at the franchise and they’ve done a terrific job with it.

First, the story is more or less the same as it’s always been. Strider Hiryu infiltrates Kazakh City and looks to take down the evil Grandmaster and his cronies. Honeslty though, and as you might imagine, the narrative isn’t all that deep since this is a decidedly old school game we’re talking about here. What there is, is pretty fun though, and nicely straightforward so it keeps you on point, but never takes you away from the action. And that’s a very, very good thing because the action in Strider is excellent.

Hiryu slices away with his blade for most of the trip here, but also can gain a series of extra arms and gear including a laser-light falcon and cyber-panther. Everything controls to perfection too and when you really get on a roll, you’ll be leaping over bad guys and slicing rows of cyber-soldiers in half with ease. Well… sometimes with ease. The boss fights here are suitable awesome- and that includes intermittent mini-bosses who can really put the hurt on you if you’re not paying attention.

One little thing that bothered me, is that you can’t really upgrade your equipment as you go. You’ll find new power-ups and extra abilities will come into play as you progress, but it’s all handled in a Metroid way (finding stuff) rather than in the way that most gamers have pretty much become accustomed to in the modern era.

By that I mean that you won’t be accessing any menus to spend points on powering up your Cypher (a Strider’s main weapon) or getting a new collar for your cyber-panther (not that you can do that anyway… but it’d be pretty cool). It’s not that big of a deal overall and I don’t want to harp too much on it, but the upgrade system is something that I personally would have rather seen taken on in a more modern way.

While the upgrades might be decidedly classic, the graphics are far from it. Strider looks as good as ever and the levels are both gorgeous and really well designed. If you’re new to the series, you’re in for a treat; and if you’re not, well, you’re in for a treat too because you’ve never played a Strider that looks (and sounds!) this good.

Neon coloring and steel superstructures cover the stages and their Russian-esque architecture along with strange cybernetic parts and huge machines. You’re even reminded from time to time that Kazakh City is a living, breathing metropolis as you’ll see citizens in the train stations and people in their homes… as you break and enter in order to grab a health-pack. They even cower in fear or run away as you enter! So cool and an element that’s pretty much universally left out of side-scrolling action games in general.

There’s really not much to dislike about Double Helix’ take on Strider. Perhaps the only things are having to do with the developer’s centering on the older conventions of the genre itself. Although to be fair, it’s a side-scroller and it’s perfectly fine with that, so if you’re playing it you probably should be too.

In short, Strider (2014) is a beautiful game that exemplifies everything that’s right with one of the oldest genres in gaming. Yes, it’s that good- now go play it!

Jason's been knee deep in videogames since he was but a lad. Cutting his teeth on the pixely glory that was the Atari 2600, he's been hack'n'slashing and shoot'em'uping ever since. Mainly an FPS and action guy, Jason enjoys the occasional well crafted title from every genre.
@jason_tas
Previous New Avengers #16.NOW! (Comics) Preview
Next Child of Light Deluxe Edition on the way