The universe itself is unraveling and Namor and the Black Panther make a pact that might be too late to stop the end from coming. 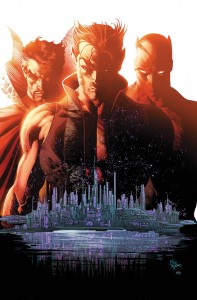 This March, the past comes back to haunt even the most powerful heroes in NEW AVENGERS #16.NOW, from New York Times Bestselling writer Jonathan Hickman and chart-topping artist Rags Morales! No more bloodshed. The proud Black Panther and the arrogant Namor have sued for peace. To save their nations of Wakanda and Atlantis they must set aside their differences. As members of the Illuminati, a secret collective of the Marvel Universe’s most powerful heroes, they must work together in secret to stop the extinction of their entire universe! But their amends may be too little too late. Their universe is unravelling – and everyone pays the price for their sins. There’s no turning back for the Illuminati after this issue! No fan can afford to miss NEW AVENGERS #16.NOW!

Two things I’ve been waiting for are the return of the Illuminati and the continuation of the cosmic issues that have been hinted at for a good long time now. New Avengers #16.NOW! takes care of both in some interesting ways with the shadowy group playing hero (or trying to at least) to a cosmos that’s actually falling apart.

Personally, and I might be in the minority on this one, but I hope that we’re headed towards some kind of reboot for the Marvel U where a whole bunch of loose ends can be tied off and some of the events of the last few years can be… scrubbed… from the time stream. That’s what I’m hoping for anyway, what actually happens is something that we’re going to have to wait and see since Marvel has actually been playing this one pretty close to the chest.

At least we’ll get something of a setup and a peek into what might be to come when New Avengers #16.NOW! arrives on March 26th from the team of Jonathan Hickman and Rags Morales.

Jason's been knee deep in videogames since he was but a lad. Cutting his teeth on the pixely glory that was the Atari 2600, he's been hack'n'slashing and shoot'em'uping ever since. Mainly an FPS and action guy, Jason enjoys the occasional well crafted title from every genre.
@jason_tas
Previous A look at the Donkey Kong Country Tropical Freeze Challenge Trailer
Next Strider [2014] (Xbox One) Review